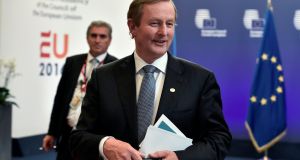 ‘The closer the relationship the UK is going to have with the European Union the better for us,’ Taoiseach Enda Kenny lsays. Photograph: Eric Vidal/Reuters

Taoiseach Enda Kenny has told the EU summit in Brussels about the importance of protecting the peace process and the common travel area in the negotiations to facilitate the British exit from the Union.

Mr Kenny also gave the summit a message from Scottish first minister Nicola Sturgeon saying that her country should not be dragged out of the EU against its will.

Speaking at a press conference after the summit Mr Kenny said he had told the other leaders about the history of the relationship between Ireland and Britain over many centuries including the Irish contribution to the First World War and the struggle for independence which led to the creation of the state.

“Today relations are stronger than ever before and I recalled the first royal visit in 100 years of her Majesty Queen Elizabeth and the reciprocal visit of our President to Great Britain which was an enormous success. I think prime minister Cameron appreciated that and members around the table understand our position,” Mr Kenny said.

He also pointed out to the meeting that there had been a common travel area between Ireland and Britain since 1922 and also that the European Union had played a critical role in the Northern Ireland peace process.

Mr Kenny said that the other leaders around the table were very familiar with the common travel area, the peace process and the importance for Northern Ireland.

He also said he had spoken to David Cameron about the issues and he offered to give whatever help he could in his remaining time in office to try and preserve the common travel area and protect the peace process.

The Taoiseach said that when the negotiations begin on the UK exit these issues would be a central focus for the Government.

“We have an interest in having an outward looking strong and prosperous United Kingdom. The closer the relationship the UK is going to have with the European Union the better for us. But it is clear from the conclusions of the meeting that access to the single market is tied to the fundamental acceptance of the four freedoms which include freedom of movement of people.”

Mr Kenny said the outcome of the referendum in the UK highlighted a crisis of confidence not only in the EU but also in politics in general throughout the western world.

Mr Kenny said the atmosphere at the meetings on Tuesday and Wednesday was very calm, very considered and very measured.

“There was clear agreement that there should be some little time given here for the Conservative Party to elect a new prime minister and there was also a very clear understanding that it would take time for the UK to inform the Commission of its intention to invoke Article 50 to withdraw from the European Union.

“And there can be no negotiations with the United Kingdom until such has been performed and the statement has been made.”

He said the withdrawal negotiations were likely to take at least two years and possibly longer. “In the meantime the UK continues to be a full member of the EU. So it is important to avoid any premature speculation about the negotiations. The meeting was very clear that we are united in solidarity at this time.”

Mr Kenny said politics in Britain were now in a turbulent phase with the prime minister’s intention to resign and the obvious difficulties in the Labour Party.

He added that there had been a discussion at the table this morning about how best to manage the negotiations from an EU perspective and what had become clear was that it would be under the control of the European Council while the Commission would deal with the technical aspects of the negotiations.

He said hat Ms Sturgeon had informed him at a meeting of the British-Irish Council in Glasgow a couple of weeks ago that if the vote was to leave she would make contact to ask the Irish side to emphasise to the European Commission that Scotland had a very strong belief that it should not be dragged out of the EU having voted to stay.

“So she is meeting with President Juncker and in my speaking to her yesterday she wanted that repeated which I said on her behalf last evening.”

Coronavirus: Spain records no new deaths for second day in a row 16:57
Russia plans parades and referendum despite high Covid-19 numbers 16:51
Activist crosses Uganda on a motorbike to deliver suncream to people with albinism 16:02
US protests continue amid curfews and plea from George Floyd’s brother 14:33
US: Trump threatens to deploy military to end protests 00:32

1 Luke ‘Ming’ Flanagan bares his bottom half to European Parliament
2 Trump turns to bible for photo op as DC burns around him
3 Coronavirus: Public urged to stick with ‘tough’ restrictions to allow phase two proceed next week
4 Covid-19: Easing of restrictions ‘unlikely’ to be speeded up
5 ESB technician who came across 10,000 kilovolt live cable awarded €83,000
Real news has value SUBSCRIBE