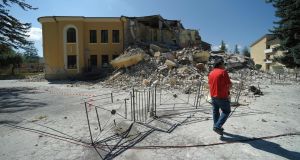 The Romolo Capranica school in Amatrice, where €500,000 of reconstruction work did little to offset damage when the earthquake struck. Photograph: Andreas Solaro/AFP/Getty

In his homily during Tuesday’s funeral of earthquake victims in Amatrice, the Bishop of Rieti, Domenico Pompilli, observed that “it is not the earthquakes which kill but rather the works of man . . . God cannot be used as a scapegoat for this.”

As the public prosecutor’s office in Rieti and the national anti-corruption authority in Rome both mount investigations into building practices in and around Amatrice, it could be that the bishop’s words are proved right.

It is important to understand that Amatrice is just 50km (30 miles) up the Northern Lazio road from L’Aquila, the Abruzzo town which was hit by a huge earthquake in 2009 in which 308 people died. In other words, if you had not known it before (but everybody did know all too well), this is a highly unstable seismic zone.

In the wake of that 2009 tragedy, all sorts of public financing was made available to make public buildings seismic-proof. For example, €611,000 was set aside by the region for work on six bridges in and around Amatrice.

Yet, after last week’s earthquake, two of those bridges are so badly damaged that they have been closed to traffic, leaving Amatrice with just one access road.

Rome daily La Repubblica calculated this week that, in the last six years, approximately €84 million was made available to the province of Rieti for “reconstruction”.

Was this money spent badly, did it find its way into private pockets or did it ever exist? Was it merely another meaningless political promise?

Rieti investigator Roberto Saieva has indicated that one of the buildings he will be looking at closely is the Romolo Capranica schoolhouse in Amatrice. This complex included a nursery, a primary and a junior high school – in other words, catering for children from three to 13.

At a reopening of this school in 2012, mayor Sergio Perozzi was pleased to announce that €500,000 worth of reconstruction work involving the weightbearing pillars had been executed.

Yet the school is now a heap of rubble. Daily Il Fatto Quotidiano earlier this week alleged that the company which carried out this work, Consorzio Stabile Valori, is linked to Cosa Nostra in Sicily via the Mollica family in Messina.

The Cricchi firm is a well-known firm which has carried out a long list of work on prestigious buildings such as the presidential Quirinal Palace, Rome judicial courts and the ministry of justice.

Yet, the Cricchi firm is due to stand trial next month charged with corruption in relation to the €19 million reconstruction of the Church of Santa Maria Paganica, damaged in the 2009 earthquake.

Patrizio Cricchi is accused of having paid a €10,000 bribe (the first part of a €190,000 bribe) to an official from the ministry of arts heritage, a payment allegedly made in Carsoli on the road from Rome to L’Aquila. How was a company already under investigation for reconstruction work offered more reconstruction work?

Rieti prosecutor Roberto Saieva will be looking closely at four buildings – the Romolo Capranica school, the Grifoni Hospital, the Church of San Pietro and Lorenzo in nearby Accumoli (where an entire family died when the campanile fell on to their house) and the Hotel Roma in Amatrice, where another body was found on Wednesday.

The prosecutor’s difficult work is not made any easier by the fact that much local authority documentation currently lies buried beneath tonnes of rubble.

After all, the town hall or municipio is today just a ruin, although fortunately one without bodies since no one was in the building when the earthquake struck at 3.36 last Wednesday morning.