Italy court to rule on Amanda Knox conviction on Friday

Knox and Raffaele Sollecito were convicted for murder of Meredith Kercher

Italy's highest court prepares to rule on whether to uphold former US exchange student Amanda Knox's conviction for the 2007 murder of Briton Meredith Kercher. Video: Reuters 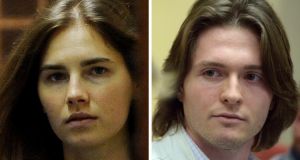 Raffaele Sollecito (right) and Amanda Knox. Cassation judges can either uphold the convictions if they find the appeals trial was properly conducted or order yet another appellate trial. Photograph: Filippo Monteforte/Tiziana Fabifilippo/AFP/Getty Images

Italy’s highest court will not rule until Friday on whether to uphold the conviction of American Amanda Knox and her Italian ex-boyfriend for the murder of British student Meredith Kercher, a court official said.

The case, which has inspired books and films, has riveted media attention for eight years and the court’s eventual decision could trigger a legal battle over Knox‘s extradition.

The Court of Cassation began the hearing on Wednesday and had been expected to decide later in the day but closing arguments went slowly and judges rescheduled for Friday morning.

Knox (27) and Raffaele Sollecito (30) were convicted for the second time last year for the murder of 21-year-old Kercher, an exchange student from the University of Leeds who was stabbed to death in a house the women shared in Perugia, a university city in central Italy.

A confirmation of the convictions could trigger a complicated battle to try to extradite Knox from the United States.

Sollecito, whose passport has been withdrawn and who attended the hearing, could be arrested.

The court might, however, overturn the conviction, and then either order yet another trial or effectively acquit the two - though legal experts said that last option was unlikely.

Both Knox and Sollecito have maintained their innocence throughout.

Washington has refused to send military personnel to serve sentences in Italy in the past, but sparing a private citizen from extradition would be an “anomaly”, Pier Luigi Petrillo, Professor of Comparative Law at Rome‘s LUISS university, said.

“If an American citizen has been found guilty of a crime and in particular a serious crime such as murder on Italian soil, there is an obligation by the United States to extradite the American citizen,” Petrillo said.

Knox has come to be seen in her home country as the victim of a botched investigation and an unwieldy legal system.

She and Sollecito were first convicted in 2009. That ruling was overturned in 2011 and both were freed from prison. Knox then left Italy for her hometown, Seattle.

The Court of Cassation later ordered a new trial, and a Florence court convicted them again last year, handing Knox a 28-1/2 year sentence and Sollecito 25 years.

The prosecution originally portrayed Knox as a fast-living party goer who killed Kercher, when a sex game went wrong.

The Florence verdict said the killing was more likely due to an argument between the roommates.