It was over in less than a minute: For France a dark, disorienting week reached a brutal end

French police today, January 10th, released a video of the assault on a print works where the two brothers suspected of the Charlie Hebdo killings had taken refuge. The brothers had taken one hostage, who escaped unharmed. Source: DCOM 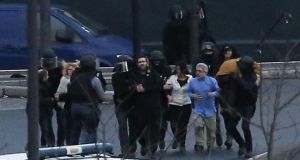 Hostages are evacuated by special forces from the supermarket in Porte de Vincennes in Paris. Photograph: Thomas Samson/AFP/Getty Images

Dusk was settling over Porte de Vincennes. Flashing blue lights illuminated the darkening thoroughfare, where hundreds of armed police had taken up position, their guns trained at the supermarket door. Teams of paramedics looked on from a hastily assembled field hospital. Neighbours crouched to watch from their apartment windows. An uneasy calm hung in the air.

Suddenly, four loud explosions boomed in quick succession. Then a brief pause followed by a round of intense, rapid gunfire, making a sound so deep and insistent it was as if the ground beneath us was being thumped by some great force. As the gunfire echoed around the streets, the supermarket door opened and more than half a dozen people, dazed and screaming, ran out towards the police. Among them was a man clutching an infant to his chest.

A police commando, hit by a bullet from the shop, fell to the ground. Two colleagues grabbed him by the uniform and hauled him along the ground to safety before joining the stream of black suits pouring into the shop. More shots. A fleet of ambulances moved in.

It was chaotic and bloody, and it was all over in less than a minute. For France, a dark, disorienting week had reached its violent conclusion. Three men suspected of two terror attacks in as many days were killed in separate shoot-outs after taking hostages in the city and its eastern outskirts.

The raid on the kosher supermarket at Porte de Vincennes, where four hostages were also killed, came within minutes of police storming a printworks in Dammartin-en-Goële, close to Charles de Gaulle airport, where the two brothers suspected of killing 12 journalists and policemen in an attack on Charlie Hebdo magazine on Wednesday were shot dead by police. The atrocity at the offices of the satirical title was the worst terrorist attack in France in more than half a century.

The Charlie Hebdo killings prompted a global outpouring of outrage and revulsion, with tens of thousands of people turning out at rallies and vigils in support of press freedom under the slogan “Je Suis Charlie”.

In a national television address, French president François Hollande concluded an extraordinary day by solemnly appealing for national unity after what he called “a tragedy for the nation”.

He will join other national and foreign leaders at a “silent rally” in Paris tomorrow. German chancellor Angela Merkel, British prime minister David Cameron, Spain’s Mariano Rajoy and Matteo Renzi of Italy have said they will also attend.

Brothers Chérif (32) and Said Kouachi (34) had holed themselves up in the printworks on Friday morning as police closed in on them after a huge two-day manhunt across northern France. Officials said the pair were acquaintances of Amedi Coulibaly, who is suspected of killing a policewoman in Montrouge in southern Paris on Thursday before taking hostages at the supermarket. Gael Fabiano, of the UNSA police union, told The Irish Times Coulibaly walked into the shop firing a Kalashnikov. It was, Mr Hollande said, “an appalling anti-Semitic act”.

The hostage taken by the Kouachi brothers at the printworks survived uninjured. A second employee managed to hide from the two gunmen under a sink, escaping unharmed after being able to speak to police on the phone and describe the building’s layout.

When the raid began, the brothers ran from the building, shooting 50 rounds of ammunition. A local politician had earlier said they had told negotiators they wanted “to die as martyrs”.

In a second recorded conversation, Coulibaly told BFM they had synchronised the Charlie Hebdo and Montrouge attacks. He said he had targeted the Paris shop “because it was Jewish”, that he was holding 16 hostages, and that four people had died when he entered the supermarket. He said he had been mandated by Islamic State.

Citing reliable police and judicial sources, French media reported that police timed their raid on the supermarket as Coulilaby was at prayer: he reportedly used the shop’s phone and failed to hang up properly.

“I’m in shock,” said Jean-Marc Sellam, watching events from the police cordon. “But I’ve been in shock for 48 hours.” His friend’s niece, in her early 20s, was among the hostages. Around him, hundreds of police, including dozens of plain-clothes officers with handguns, streamed towards the scene.

French Jewish leaders called for vigilance. With the city on high alert, synagogues shut their doors and the mayor’s office ordered the closure of shops on rue des Rosiers, a street known for its Jewish-run shops and bakeries.

The violence has raised questions about the surveillance of radical Islamists, religion and censorship in a country where Islam and immigration are already fraught political themes.

Chérif Kouachi, one of the Charlie Hebdo attackers, was known to police and intelligence services after being convicted of terrorism charges in 2008 for ties to a network sending jihadis to fight US forces in Iraq.

Prime minister Manuel Valls greeted the surviving Charlie Hebdo journalists as they arrived for work at the headquarters of Libération, which has provided them with office-space and computers. They plan to bring out the paper as planned next Wednesday, and to print a million copies.