Four people were killed in a suicide bombing in Turkey's largest city of Istanbul on Saturday (March 19), the local governor said, bringing the number of people killed in the attack to five including the suicide bomber. Video: Reuters 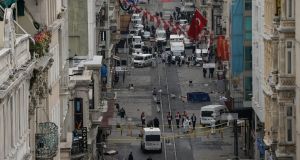 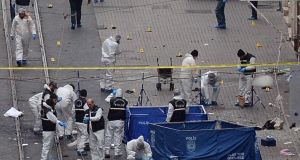 The forensic team at the scene of an explosion, on a street, in Istanbul, Turkey, on Saturday. Five people have been killed and a number of Irish nationals injured in the blast. Photograph: AP 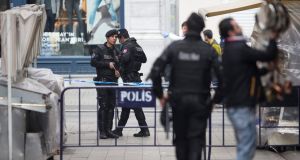 Turkish policemen stand in a cordon after a suicide bomb attack at Istiklal Street in Istanbul, on Saturday. Photograph: AFP 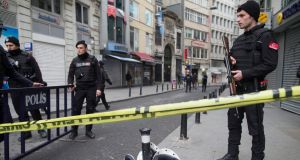 epa05220146 Turkish policemen stand in a cordon off street after a suicide bomb attack at Istiklal Street in Istanbul, Turkey, 19 March 2016. According to media reports, two people have died and seven injured in the suicide bomb in Istiklal Street, a main high street in the centre of Istanbul, just off Taksim Square. EPA/TOLGA BOZOGLU 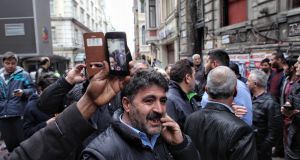 People take pictures following a suicide bombing in a major shopping and tourist district in the central part of Istanbul. Photograph: Getty 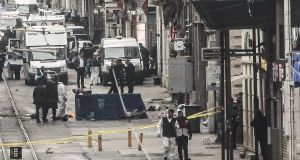 Emergency services at the scene of a suicide bombing in a major shopping and tourist district in the central part of Istanbul. Photograph: Getty 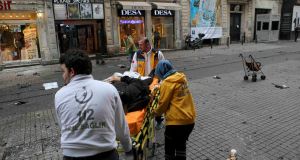 A man is helped by emergency services following a suicide bombing in Istanbul. Photograph: Reuters

An Irish-Algerian family who were injured in a suicide bombing attack in Istanbul on Saturday that killed four people has returned home to Ireland.

Irish ambassador to Turkey Brendan Ward told The Irish Times an Irish-Algerian family - two parents and three children - were among those injured in the bombing.

Mr Ward said the parents suffered minor injuries, “some cuts and bruises” and were treated at Okmeydani EAH hospital 5km north of the blast site on Istiklal Street, a long pedestrian avenue lined with international stores and foreign consulates.

“They were in Istanbul on a short holiday visit. Luckily, my assistant was in Istanbul this morning and was able to meet them at the hospital to help with translation and other matters,” said Mr Ward.

“They are expected to be discharged soon and are due to leave Istanbul tonight [Saturday] on an eight o’clock flight.

Minister for Foreign Affairs Charlie Flanagan said he was deeply saddened by the “horrific bomb attack” in central Istanbul.

The department has updated its travel advice to advise anyone planning on travelling to Turkey to exercise caution as the threat from terrorism remains high.

Turkish prime minister Ahmet Davutoglu said the bombing was “inhumane” and would not stop Turkey, which has been targeted by Kurdish and Islamic State militants, from fighting “centres of terrorism”.

Israel said two of its citizens died in the attack, Washington said two Americans had been killed and a Turkish official said one victim was Iranian, suggesting that some of the dead may have had dual nationality.

At least 36 people were injured in the attack including twelve foreign nationals.

Earlier, it was reported that Irish citizens were among the injured.

“There is information that it is an attack carried out by an Isis member, but this is preliminary information, we are still checking it,” Israeli prime minister Benjamin Netanyahu told reporters on Saturday, referring to Islamic State. He said a third Israeli may have died and 11 Israelis are among the injured.

“We as a nation are unfortunately now face to face with a situation of unlimited, immeasurable acts that are inhumane, defy human values and are treacherous,” Mr Muezzinoglu said.

Turkey is battling a widening Kurdish insurgency in its southeast, which it sees as fuelled by the territorial gains of Kurdish militia fighters in northern Syria, and has also blamed some of the recent bombings on Islamic State militants who crossed from its southern neighbour.

“No centre of terrorism will reach its aim with such monstrous attacks,” Mr Davutoglu said in a written statement.

“Our struggle will continue with the same resolution and determination until terrorism ends completely.”

One of Turkish official said Saturday’s bomber, who also died in the blast, had planned to hit a more crowded location but was deterred by the police presence.

“The attacker detonated the bomb before reaching the target point because they were scared of the police,” the official said, declining to be named as the investigation is ongoing.

Another official said investigations were focusing on three possible suspects, all of them male and two of them from the southern city of Gaziantep near the Syrian border.

There was no further confirmation of this.

Turkey is still in shock from a suicide car bombing last Sunday at a crowded transport hub in the capital Ankara which killed 37 people and a similar bombing in Ankara last month in which 29 died.

A PKK offshoot claimed responsibility for both. The latest attack brought widespread condemnation. Iranian Foreign Minister Mohammad Javad Zarif, on an official visit to Istanbul, said it showed “the ugly face of terrorism”.

France condemned it as “despicable and cowardly”.

Are you in Istanbul? Have you been affected by these events? Please get in touch with us: newsdesk@ irishtimes.com.