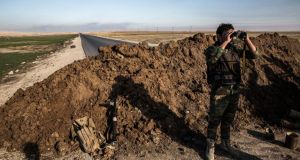 A peshmerga soldier on Highway 47, which links Mosul and Raqqa: Families of Islamic State fighters are believed to be attempting to flee to Mosul in Iraq where IS also holds sway. Photograph: Bryan Denton/The New York Times

Residents in Islamic State’s de facto capital Raqqa are trapped in the Syrian city as the militants attempt to consolidate and put a brave face on recent defeats, activists have said.

Raqqa has been under heavy bombardment over the past three days after a series of co-ordinated assaults in Paris claimed by the terror group provoked intensified airstrikes by France along with raids by the US-led coalition and Russia that have killed close to three dozen militants.

French warplanes conducted 30 air strikes in retaliation on Sunday night, followed by seven more on Monday night. Activists reported 15 explosions overnight on Tuesday, though they said the city was also struck by an unidentified ballistic missile.

Islamic State has come under increasing military pressure in recent days, losing the city of Sinjar in Iraq to Kurdish and Yazidi forces backed by US air strikes, a defeat that severed a crucial link between its two major urban centres, Raqqa in Syria and Mosul in Iraq. The regime of president Bashar al-Assad recently broke a one-year siege of a strategic military base in the province of Aleppo – another setback for the militants.

Iraqi intelligence officials this week told Associated Press the Paris attacks were planned in Raqqa, where the attackers were trained specifically for the operation with the intention of sending them to France. Islamic State also claimed responsibility for recent attacks in Turkey and Lebanon, as well as the downing of a Russian plane over the Sinai peninsular in Egypt.

Activists with wide contacts in Raqqa said the militants were barring civilians from leaving the city in a continuation of a policy that allows only individuals with serious medical conditions to leave after receiving a one-week Islamic law course. “The people feel that they are in a large prison and that at any moment there could be a battle for Raqqa or preparatory air strikes where they will be the biggest losers,” said Tim Ramadan, an activist with Raqqa is Being Slaughtered Silently, a campaign group that opposes both Islamic State and the Syrian regime. “People are trying as much as they can to get a permit to leave.”

The Syrian Observatory for Human Rights, a network with wide contacts inside Syria, said 33 militants died in the three-day raids, which targeted locations in and around Raqqa. It said families of Islamic State fighters had attempted to flee to Mosul in Iraq where IS also holds sway.

Mr Ramadan said there was no obvious displacement in the city, saying Islamic State was trying to present a strong front to locals. “Daesh will never show its weakness or that it is being harmed by the airstrikes,” he said, using the group’s Arabic acronym.

He said Islamic State had attempted to portray its recent losses in Sinjar and Aleppo with locals as a tactical withdrawal that would pave the way for a counterattack.

The group, however, has continued to use human shields and precautions that have been in place in the past, including placing command centres in civilian neighbourhoods and hiding their vehicles among locals. An activist from Raqqa told Associated Press that to avoid being hit in their bases, the fighters had moved into empty homes in residential neighbourhoods abandoned by people who had fled the city and had been ordered to use only side streets to avoid drones, following last week’s killing of the British jihadi Mohammed Emwazi.

IS is also using individuals convicted of minor offences to carry out work on the front or to fight, as a way to bolster its ranks amid increasing pressure, Mr Ramadan said. The terrorist group has recently mandated that all youths of fighting age register with local police. – (Guardian service)