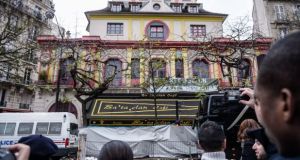 People look at the facade of the Bataclan theatre after police reopened traffic on the Boulevard Voltaire in Paris, France, last November. Photograph: Christophe Petit Tesson/EPA

An Irish survivor of the Bataclan massacre hopes victims will get “some small piece of justice” for the lives lost that night following the arrest of one of the suspected masterminds behind the attack.

Katie Healy was at the Eagles of Death Metal concert in Paris with her then boyfriend, now fiancée, David Nolan on the night of 13th November when gunmen burst into the theatre and opened fire.

There were 89 fatalities at the Bataclan, and Mr Nolan sustained a gunshot wound to his foot while attempting to shield Ms Healy from a hail of bullets as the attackers advanced.

In all, 129 people were killed across the French capital that evening during co-ordinated assaults at the Stade de France, the Bataclan and nearby bars and restaurants.

At the time Ms Healy recounted how people fell to the ground around them as the couple played dead, and that they said their goodbyes to one another in the middle of the onslaught.

She told The Irish Times that she is not sure exactly how she feels having heard the news that 26 year-old Salah Abdeslam was captured during a police raid in Brussels on Friday.

“While I am pleased he has been captured alive, I am not sure what my true feelings are at this time,” she said.

She continued: “[Abdeslam’s ] arrest happened on a Friday, stirring up many emotions and memories for us all.

“Myself and others present on November 13th feel that now, with someone arrested alive, we may finally get some small piece of justice for the many lives lost that night.

“My thoughts remain firmly with my friends, all over the world, that this news cannot adequately console,” concluded Ms Healy.

She had earlier tweeted that “emotions are high” following Abdeslam’s capture and said “it is time for justice”.

On Friday she received a package of items belonging to her that were left behind in Paris before later learning that one of the men believed to be a key instigator behind the atrocity had been apprehended by Belgian authorities.

1 Woman stranded in Ireland due to pandemic has ‘miracle baby’
2 ‘Difficult months ahead’: Europe prepares for more pain as Covid cases soar
3 Almost 20% of staff at Dublin hospital have antibody evidence of Covid-19 infection
4 Two hundred Irish retailers for all your online Christmas shopping
5 Covid-19: Critical cases from NI could put pressure on services in Republic
Real news has value SUBSCRIBE