We will contribute in whatever way we can in response to crisis, says Fitzgerald 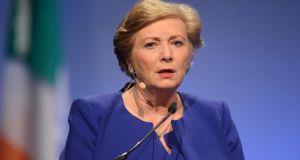 Frances Fitzgerald: “We will continue to play our part.” Photograph: Dara Mac Dónaill

Ireland will take in more refugees and play its part in responding to the migration crisis, the Minister for Justice has said.

Frances Fitzgerald joined Minister for Foreign Affairs Charlie Flanagan for a high-level European Union meeting after yet another mass drowning.

The Minister said a Europe-wide response was required but that Ireland would contribute in whatever way it could. “The EU as a whole and its member states clearly need to use all law enforcement resources and tools available to tackle the organised criminal gangs involved in the smuggling and trafficking of migrants.

“We will continue to play our part through our resettlement programme, which allows us to bring refugees directly to live in Ireland from conflict affected regions.”

The spokesman said Ireland has been gradually increasing the number of refugees over the past two years. The figures have steadily increased from 39 in 2012 to 76 in 2013 and 96 in 2014.

Ireland is more than willing to take more refugees, Mr Flanagan said, but couldn’t put a figure on how many it could take in. He said: “Ireland will play our part in that regard. We have done so to date.

“We have agreed to accept in excess of 200 Syrians, some of whom are in the course of being settled in my own constituency.

“I would envisage a situation where each and every EU member state accepts a measure of responsibility in this regard because the current situation cannot continue.”

Over the past 2½ years, just 16 people from Libya have sought refuge in Ireland.

The Department of Justice said a small number of people from Mediterranean countries, including 23 Sudanese refugees from Tunisia in 2011 and 35 of Afghan and Palestinian origin, were admitted from Syria in 2013.

Another 30 refugees, originally from Eritrea, Ethiopia and Somalia, were relocated from Malta in 2012 and 2013 and 90 Syrian refugees were admitted from Lebanon and Jordan in 2014.

Minister for Transport Pascal Donohoe said the EU now needed to rise to the challenge ahead of it.

“Ireland will play its part in responding to the humanitarian catastrophe that happened yesterday,” he said.

“The scale of life and the way in which those lives were lost at sea is just horrific.”