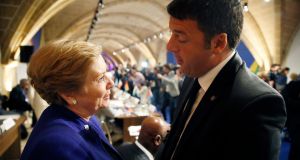 Minister for Justice Frances Fitzgerald with Italian prime minister Matteo Renzi prior to the start of the second day of the Valletta migration summit in Malta. Photograph: Armando Babani/EPA

Ireland is ready to begin accepting its allocation of refugees under the EU’s relocation plan by the end of this year, but challenges still remain in building up capacity at the EU “hot spot” areas where migrants are arriving, the Minister for Justice has said.

Speaking at the headquarters of the European Asylum Support Office (EASO) office in Malta on Thursday, Frances Fitzgerald said that Ireland intended to accept 20 refugees by December, part of a broader commitment to accept 4,000 refugees in total.

“We’re certainly ready to begin to take people in Ireland, we have the organisation in place, we have the accommodation . . . hopefully we will see the first people arriving in Ireland by the end of the year”. But she added that the broader issue of capacity-building at the EU locations where migrants are received and registered remains an issue.

“It’s about . . . establishing the hot spots in the right places, making sure that the European Asylum Support Office has the capacity to build up the hot spots where they are needed so the registration can take place, and then we can begin to see more orderly migration, that’s the goal.”

The European Commission established “hot spots” in frontline countries such as Italy and Greece to help deal with the asylum needs and relocation requirements of people disembarking from boats, but the system has been struggling to cope with the numbers arriving.

Ms Fitzgerald met senior officials from the EASO on Thursday, including Ireland’s refugee applications commissioner, David Costello, who is Ireland’s representative and deputy chairman of the EASO management board. Speaking after the meeting, Mr Costello said that challenges still remained in establishing the hot spot system.

“The big challenge is going to be building up the hot spot infrastructure. For example, we need office space in Greece in particular. We need other infrastructural supports such as IT and computers. The EASO is working very closely with the Greek authorities to put that infrastructure in place and the staff can move over from Ireland and other member states to do the registration process.”

He said that while Ireland would be prioritising family groups, each member state had limited say over which people would participate in the relocation scheme. “Effectively it is for the EASO, Italy and Greece, and the member states they are travelling to, to work together to bring the people over . . . It’s not really a question of selection.”

Ms Fitzgerald also said that the problem of “secondary movement” whereby relocated migrants simply move on to other member states once they are relocated, would not be tolerated. “There is a very clear agreement that that’s not going to be acceptable in the second country, so that simply can’t be part of the approach.”