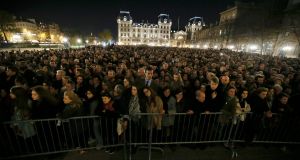 People gather outside Notre Dame Cathedral, Paris, for a Mass after the attacks in the city, November 15th, 2015. Photograph: Pascal Rossignol/Reuters

An Iraqi intelligence dispatch sent to coalition countries warned of imminent assaults by Islamic State the day before the deadly attacks in Paris killed 129 people, it has emerged.

Iraqi intelligence said IS leader Abu Bakr al-Baghdadi ordered attacks on coalition countries fighting the jihadi group in Iraq and Syria, as well as on Iran and Russia, “through bombings or assassinations or hostage-taking in the coming days”.

Six senior Iraqi intelligence officials corroborated the information in the intelligence dispatch, and four of them said they warned France specifically of a potential attack.

The dispatch said the Iraqis had no specific details on when or where the attack would take place.

A senior French security official said French intelligence gets this kind of communication “all the time” and “every day”.

Two Iraqi officials said France was warned beforehand of details that they said French authorities have yet to make public.

Among them is that the Paris attacks appear to have been planned in Raqqa, Syria - Islamic State’s de-facto capital - where the attackers were allegedly trained specifically for this operation with the intention of sending them to France.

The officials also said a sleeper cell in France met the attackers after their training and helped them execute the plan.

There were 24 people involved in the operation, they said - 19 attackers and five in charge of logistics and planning.

Iraq’s foreign minister Ibrahim al-Jaafari told journalists in Vienna on Sunday that Iraqi intelligence agencies had obtained information that some countries would be targeted, including France, the US and Iran, and had shared the intelligence with those countries.

The Iraqi government has been sharing intelligence with various coalition nations since they launched their air strike campaign against IS last year.

In September, the Iraqi government also announced it was part of an intelligence-sharing quartet with Russia, Iran and Syria for the purposes of undermining the militant group’s ability to make further battlefield gains.