Opinion: Deaths in the Mediterranean are a stain on European Union’s human rights record 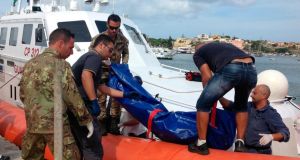 The body of a drowned migrant is unloaded in the port of Lampedusa early this month. Photograph: AP

In the last 10 years, 6,200 immigrants have died off the coast of Sicily, most of them North African refugees, some of them economic migrants, all of them desperate human beings.

Earlier this month, two separate incidents, within days of each other, added 390 victims to this macabre tally. Both tragedies involved capsized boats that were never seaworthy, with insufficient fuel to reach the desired destination, and which were grotesquely overcrowded. The victims included mothers, fathers and many children, all of them trying to escape war-torn countries, and they paid the price for wanting to provide a safe and dignified future for themselves and their families.

In the aftermath of these humanitarian tragedies, there are two types of questions one could ask. One is: “Who should pay for immigrants and refugees?” This question, which is ultimately motivated by economic concerns, is the dominant preoccupation of the Italian and European Union authorities today, and has been for a long time.

This year alone, there has been a small but steady stream of refugees who have risked their lives to reach Sicily from North Africa, most of them escaping from Syria, Eritrea and Somalia, as well as from Libya, Egypt and Tunisia. Who should provide for them? Who should foot the bill?

Ugly underbelly
Though these concerns are legitimate on one level, they have an ugly underbelly. In looking at migration purely through economic lenses, what we are really asking is: “What is best for us?”, where “us” stands for the rich countries in the EU, and “them” refers to all those who are potentially threatening our wellbeing. Framed in these terms, the debate on immigration focuses almost exclusively on arguments for and against the interests of the better-off. Those who are not against immigration will argue that it is “best” for a rich country to allow in immigrants, to the extent that there is a gain to be made from an influx of cheap labour. Those who oppose immigration deny these economic facts and highlight the negative effect of immigration on our fragile labour markets and the already struggling welfare state.

These are familiar debates about immigration, well-rehearsed on both sides, and always supported by a battery of new economic findings, but they are also ultimately futile. This is not to deny the importance of economic issues. But they are secondary and ought to be subordinate to concerns of a different nature. Next time we read about hundreds of people risking their lives to secure a better future, and of the human and humanitarian tragedy that ensues when they fail, we need to remember that the most pressing question we ought to ask ourselves is not “Who should pay for them?” but “What can we do to help them?”

The latter is a more philosophical question, motivated by ethical imperatives rather than economic concerns. As the Harvard-based political philosopher Mathias Risse argues in his book On Global Justice, there are at least two reasons, of a strictly moral character, that ought to dictate our thinking about immigration.

First, immigration policies limit human freedom; to deny a person entry into a country is to constrain their right to choose a life one has reason to value, and any restriction of rights or liberties requires moral scrutiny. Everything has a price, but we need to think of basic liberties as a right, not a luxury or a commodity.

Second, immigration is not about “us” and “them”. Those of us lucky enough to be born and raised in the privileged parts of the world have something in common with the immigrants and refugees who risk their lives to improve their living conditions, and often die on our doorsteps in trying: the planet we inhabit.

We need to start thinking of the Earth as a collective property of humanity. If we do so, we will soon realise that immigration policy is not a privilege that countries may or may not bestow on newcomers. Instead, we must think of immigration in terms of a fair, proportionate way of sharing the Earth.

As we come to terms with the latest incident of a sunken migrant boat in the Mediterranean, we can be certain of one thing: more people will die in the coming months and years in a desperate effort to enter the EU. These deaths, past and future, are a stain on Europe’s proud human rights record. Furthermore these deaths are not caused by natural disasters; they are the result of political decisions. As such, each death is not merely a terrible misfortune, but an injustice.

Vittorio Bufacchi teaches in the philosophy department at University College Cork, and is the author of Social Injustice: Essays in Political Philosophy (Palgrave, 2012)