Hungary plans to cut subsidies and space for refugees 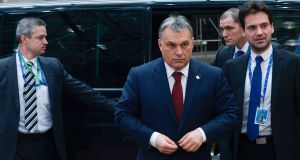 Hungary plans to cut subsidies for refugees and radically reduce the space available in migrant detention centres in a move that a human rights body says is aimed at forcing refugees to leave the country.

According to draft legislation published by the government yesterday, from April 1st those who are granted some kind of protection or asylum will be allowed to stay in a camp for only one month, instead of two months now.

The decree said the maximum space available in holding centres should be identical to that prescribed in prisons.

The government, which has imposed hardline policies throughout Europe’s migrant crisis, will also eliminate some subsidies, such as funds aimed at supporting education, for those who receive protection.

“The main goal of the tightening is to reduce social subsidies for asylum seekers and those who received international protection,” the government said, adding this could help prevent economic migrants seeking asylum in Hungary.

Last year just 508 asylum seekers received some kind of protection in Hungary, including asylum, according to data from the immigration office.

Hundreds of thousands of migrants fleeing war and poverty in the Middle East and Africa have crossed through Hungary on their way to western Europe, mainly Germany.

Prime minister Viktor Orban’s right-wing government erected a steel fence on Hungary’s southern borders to keep the migrants out and introduced tough legislation to punish those who tried to cross into Hungary illegally.

The Hungarian Helsinki Committee, a non-governmental human rights watchdog, said the new rules would in effect abolish the integration of refugees in Hungary and push them to other countries.

“The regulation shows the Hungarian government’s intention: no integration help from the state in Hungary,” said Marta Pardavi, co-chair of the Helsinki Committee. “If these people don’t receive any help beyond getting some status [of protection] they ... can only trust the system helping the homeless.” –(Reuters)