How did the Holy See get recognition as a state? It just did

Opinion: the cradle of the Catholic Church is a constitutional wraith and a scam 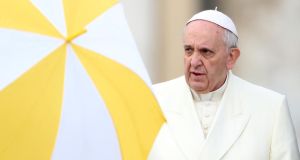 “The church is facilitated in presenting itself today as a religious organisation, tomorrow as a state – a handy arrangement, given some of its more sordid entanglements.” Pope Francis attends his weekly audience in St Peter’s Square, Vatican City, yesterday. Photograph: Franco Origlia/Getty Images

It was the post office in the Vatican that earned the Holy See its first stamp of approval as a sovereign state. This explains why Vatican stamps are so huge and colourful, possibly.

For pre-teen philatelists of my era the chunky, triangular stamps decorated with gold-tinged depictions of the papal tiara were greatly prized. You could swap one for half a dozen Brazilians. I was to be long past my stamp-collecting days before I realised that the reason for the stamps’ distinctiveness had to do not only with the Catholic Church’s penchant for gaudy display but also with reasons of state.

Five years before February 1929, when Benito Mussolini and cardinal Pietro Gasparri signed the Lateran Treaty, creating Vatican City, the Vatican had joined the Universal Postal Union: its stamps were now approved and accepted. Within two years of the treaty the Vatican was admitted to the International Telecommunications Union, on the basis of its operation of Vatican Radio.

Win acceptance
It was by dint of its membership of these two institutions that the Vatican was able to sally forth into the secular world and present itself as a sort of state and win acceptance into United Nations bodies and other global organisations. A “sort of” state, because it was not clear, and still isn’t, what entity associated with the church was involved in these manoeuvres.

What is the “Holy See” with which the Republic restored full diplomatic relations on Tuesday? The phrase refers to the “the juridical personification of the church” – the pope, the curia and the various departments, institutions and congregations that organise and control church activity.

Not a state, then, in any sense in which the word is commonly used.

Vatican City provides the temporal location for the Holy See but it is not a state either.

Vatican City falls short of being a state not mainly because of its tiny size (smaller than Lahinch Golf Club), but because of a lack of citizens. You cannot become a Vatican citizen by inheritance from your parents or being born on the territory. Citizenship comes with having a job in the territory with the church.

On this last ground alone, the absence of a permanent citizen population, Vatican City fails to qualify as a state.

And yet this constitutional wraith, the Holy See, has managed to have itself recognised as a state by more than 172 other states and all major international organisations. How did this happen? The answer is that it just did.

Observer status
In 1948 the Holy See applied for and was granted observer status by UN agency the Food and Agricultural Organisation. This was a first, quickly to be followed.

In 1951 the Holy See sent observers to meetings of the World Health Organisation and the UN General Assembly. In the same year it was admitted as the first permanent observer to the UN Educational, Scientific and Cultural Organisation. In 1956 a Holy See delegation turned up and participated in the founding conference of the International Atomic Energy Agency.

The question of the Holy See’s credentials for assuming these roles appears not to have been raised. Nor was there any debate before the Holy See finally made it in 1964 into the VIP area of global diplomacy as a permanent observer at the UN.

In March 1964 pope Paul VI wrote to UN secretary general U Thant saying he was minded to appoint a permanent observer. In April, U Thant wrote back saying, in effect, fair enough, come ahead.

There was no resolution put to the general assembly or the security council. There is no document anywhere setting out the legal basis of the Holy See’s new status.

The Holy See will have regarded its entitlement to a permanent place at the centre of things as incontestable because God-given. One New York journalist who expressed puzzlement about the arrangement to a member of the Holy See delegation in the 1970s was told that “it dates back to the 12th century”.

The church is thus facilitated in presenting itself today as a religious organisation, tomorrow as a state – a handy arrangement, given some of its more sordid entanglements. The church in the US has routinely claimed sovereign immunity from compensation claims from victims of clerical abuse.

In an instant thereafter, it can, as a religion, claim charitable status for the institutions in which the abuse took place.

The twin-track approach will be sadly familiar to many in Ireland.

Protestants I talk to about these subjects are invariably perplexed by the “now you Holy See us, now you don’t” approach. But there’s nothing much we can do about that. It just reflects one of the fundamental differences between our two traditions. There never was a Protestant born who could have thought up a scam like the Holy See.