Law debated this week says constituents will be able to look at deputy or senator’s wealth declaration, but publishing information will be an offence 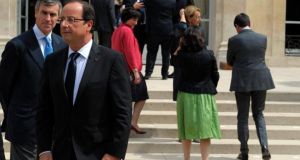 In the midst of a scandal last spring, when France’s budget minister Jérôme Cahuzac was forced to resign because he had stashed money in offshore accounts, President François Hollande promised a “shock of moralisation”. Lists of cabinet ministers’ assets were published on the prime minister’s website.

Mr Hollande said members of parliament would follow, as soon as the “law on the moralisation of public life” was passed. The promise was short-lived. Mr Hollande caved in to cries of “paparazzi democracy” from the socialist speaker of the National Assembly, Claude Bartolone, and a cohort of socialist deputies. The law debated this week says constituents will in future be able to look at their deputy or senator’s wealth declaration in the local prefecture. But publishing the information will be an offence, in recognition of the parliamentarians’ right to privacy.

The privileges accumulated by parliamentarians, a throwback to the monarchy, start with subsidised hairdressers and restaurants and a free gym at the National Assembly. They extend to chauffeur-driven cars, 80 free air tickets a year, free first-class rail travel, free bus and metro tickets and a €3,000 monthly taxi allowance.

No documentation
A French parliamentary deputy’s monthly €7,100 salary is augmented by a €5,770 tax-free allowance for office expenditures. No documentation is required, so a scandal comparable to what happened in Britain in 2009 is impossible. Deputies are also given €9,504 to pay assistants, secretaries and drivers. So many hired spouses and offspring that a law was passed limiting the family’s share to 50 per cent.

The far-right national front made it to the June 23rd run-off for the seat of the disgraced budget minister; an omen, French politicians say, of likely gains by populists in next year’s municipal and European elections. With an eye to self-preservation, 10 deputies from the socialist majority and the UMP conservative opposition advocate greater transparency in an eight-page dossier on politicians’ privileges, published yesterday by Nouvel Observateur magazine.

None of the deputies advocated the full disclosure that was promised and rescinded by Hollande. But the socialist Olivier Faure says members of parliament should have to reveal the difference in their wealth between the moment they enter office and the moment they leave.

The conservative Laurent Wauquiez says parliamentarians should be forced to give up their special pension system, which pays €6,000 a month to a retired deputy who served 20 years. “If politicians don’t apply to themselves what they ask of the French, they haven’t a chance of finding the slightest credibility,” Wauquiez says.

Civil servants
Civil servants who are elected to parliament are allowed to continue accruing benefits, which helps explain why 38 per cent of deputies are from the civil service. “High-ranking civil servants must be forced to resign when they become parliamentarians,” says UMP deputy Bruno Le Maire.

The socialist Jérôme Guedj wants the office allowance to be considered salary, and taxed as such. Barbara Romagnan, also a socialist, laments that the long-promised law banning politicians from holding more than one office, for example mayor and deputy – and receiving more than one salary – will not take effect until 2017.