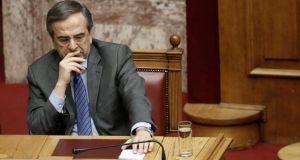 Greek prime minister Antonis Samaras attends the vote at the Greek parliament in Athens today. His coalition got the support of 168 of the parliament’s 300 MPs, 12 fewer than required. Photograph: Yannis Kolesidis/EPA

Greek MPs failed to elect a new state president today in a ballot that leaves the governing coalition the formidable task of securing a dozen more votes by the final ballot on December 29th if it is to avoid early elections that could see it lose power to the left-wing party Syriza.

In the second of three possible attempts to elect its candidate, former EU commissioner Stavros Dimas, the government of prime minister Antonis Samaras garnered the support of 168 of the parliament’s 300 MPs, eight more than in the first round of voting last week.

Should Mr Dimas fail to reach the 180-vote threshold by the third and final round of voting, snap elections must be called, which months of polls point to Syriza winning. Syriza has vowed to renegotiate the country’s bailout and reverse austerity measures.

In an attempt to drum up support ahead of the second vote, Mr Samaras offered to hold elections in late 2015 and to broaden his government to include “people who believe in the country’s European perspective”, an overture directed at the growing bloc of independent MPs as well as elements in the minor parties of Democratic Left and Independent Greeks, a nationalist anti-memorandum splinter from the prime minister’s party.

That appeal succeeded in harvesting eight extra votes from the independent benches, including two from deputies elected on a Golden Dawn ticket but who have since distanced themselves from the neo-Nazi party.

One of those MPs is facing criminal charges over his party activities and was released on bail from pretrial custody earlier this month.

Speaking after the vote, Mr Samaras expressed his confidence that his candidate would have the numbers.

“Despite our differences and despite the terrorism and mud- slinging of the Tsipras–Kammenos duo, more lawmakers voted for Stavros Dimas as president today,” he said, referring to the Syriza and Independent Greeks leaders. “I am hopeful that in the third round we will avert the danger to the nation.”

Last week, the presidential election became embroiled in controversy when an Independent Greek MP produced a secretly recorded video purporting to show him being offered a bribe of up to €3 million to vote with the government. Prosecutors have shelved their investigation into the case on grounds of insufficient evidence.

Despite the marked optimism from government circles that it can avoid elections, some analysts expressed caution. “The chances are slim but you cannot rule it out completely. The government has almost exhausted the supply of independent MPs who aren’t firmly against electing a president. It could only expect to convince a couple more,” said Nick Malkoutzis, editor of political analysis website macropolis.gr.

“This means it needs to turn to Democratic Left and Independent Greeks to get around 10 more votes, which would require a collapse of their party discipline. As things stand, the coalition looks to have left itself too much to do.”