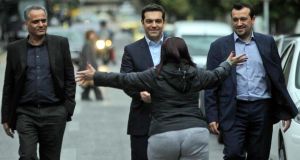 European lenders gave a cautious welcome to the election of a new government in Greece yesterday, but warned that a writedown of Greek debt was not on the table.

Less than 24 hours after radical left party Syriza emerged as the clear winner of the Greek elections, the party led by Alexis Tspiras swiftly formed a coalition government with the Independent Greeks party, with the new cabinet expected to be sworn in today. “The simple message is that the time for crisis-denial, retribution and finger-pointing is over,” the likely new finance minister, Yanis Varoufakis, said yesterday. “The time for the reinvigoration of the ideals of freedom, rationality, democratic process and justice has come in the continent that invented them.”

With Greece’s bailout due to expire next month and Greece facing billions of euro in debt repayments over the coming months, Mr Varoufakis will be tasked with negotiating with the troika on the status of its EU-IMF programme.

EU leaders including Taoiseach Enda Kenny congratulated new Greek prime minister Alexis Tspiras on his appointment, but euro zone finance ministers meeting in Brussels indicated that a cut to Greece’s nominal debt was not under consideration, though EU sources said a restructuring of Greece’s loans through the extension of loan maturities was likely.

Asked about the implications of any debt restructuring for Ireland, Minister for Finance Michael Noonan pointed out that Ireland had lent €350 million to Greece under its bailout. He added that Ireland had already significantly restructured its own debt, through various mechanisms such as extension of maturities, and the restructuring of IMF loans.

He said that a proposed EU debt conference was “not necessary yet”, pointing out that all bailout negotiations so far had been conducted within the context of the eurogroup. “I don’t think it’s necessary yet. Cyprus and Greece and Portugal and Ireland and Spain – [their bailouts] have all been resolved by negotiations at eurogroup and Ecofin and there’s no suggestion that that model won’t succeed again.”

Mr Kenny congratulated Mr Tsipras. “I wish him and his government all the best in the challenges they face,” he said in a statement, adding that he looked forward to working with him at the European Council.