Bailout talks to be held in Athens following package approval

As the Greek parliament approves a bailout package thousands of Greeks take to the streets of Athens to oppose more austerity measures. Video: Reuters 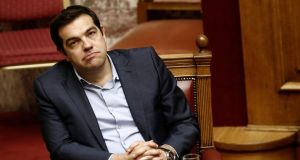 Greece’s prime minister Alexis Tsipras looks on after speaking to legislators at the arliamentary vote in Athens, Greece, on Thursday. Photographer: Kostas Tsironis/Bloomberg

Bailout negotiators are due to return to Athens to start talks on a massive new rescue package after Greece’s parliament approved tough new conditions set by lenders.

Officials in Athens and at the European Union said negotiators are expected to start arriving tomorrow, marking the first time high-level talks will be held in the Greek capital since prime minister Alexis Tsipras’s left-wing government assumed power in late January.

The news came hours after parliament approved a second round of reforms Greece’s European creditors had demanded before the negotiations could start. Mr Tsipras narrowly survived an anti-austerity revolt within his own party.

It was the final hurdle the country had to clear before talks can start over a third bailout worth around €85 billion.

Without the money, Greece would be unable to pay the debts due over the coming three years and would likely be forced to leave the euro.

Over the past week, parliament has approved two rounds of conditions — the first introducing sweeping sales tax increases and the second concerning trial and banking reform.

Mr Tsipras relied on opposition party support to push the measures through parliament.

“We have chosen a compromise that forces us to implement a programme in which we do not believe, and we will implement it because the alternatives are tough,” Mr Tsipras said. “We are summoned today to legislate under a state of emergency.”

Both sides hope discussions will conclude by August 20th, when Greece has a payment of a little more than €3 billion due to the European Central Bank.

A government official in Athens said Greece is determined to resist any further conditions being set for the third bailout.

Greece has committed to reducing state spending on pensions, but says it needs more time to draw up measures that spare low-income retirees further hardship. Major pension changes were not included in either round of reforms approved by parliament.

Bailout negotiators from the European Commission, European Central Bank, and International Monetary Fund — once commonly referred to as the “Troika” — were criticised by the Tsipras government as having trampled on the country’s national dignity and sovereign rights.

Footage of the stone-faced inspectors entering the Finance Ministry was shown on live television during their visits.

The Greek government earlier this year insisted the negotiations be moved to the Belgian capital, renamed negotiators the “Brussels Group”, and authorised them to speak to Greek negotiators, not cabinet ministers.

Following the two parliamentary votes required by creditors, the Greek government hopes the economy will stabilise following a crisis-ridden period that’s seen strict capital controls imposed amid fears over the country’s future in the euro.

Banks reopened on Monday after being closed for more than three weeks, albeit for limited transactions, as daily withdrawals at ATMs are still limited to €60 per account holder.

Dissent within Mr Tsipras’s Syriza party twice came close to toppling the government, and has fuelled speculation of an earlier-than-expected general election in the autumn.

But party critics insist they continue to back Mr Tsipras while disagreeing with a third bailout.

“Diversity is the strength of our party, not its weakness,” former minister and outspoken dissenter Panagiotis Lafazanis said.