Greece agrees to draft new list of reforms ‘within days’ 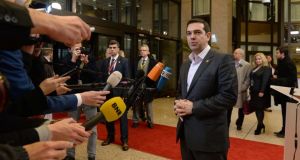 Greek Prime Minister Alexis Tsipras aid on Friday he was more optimistic after three hours of talks with leaders of Germany, France and European Union institutions on how Greece can secure further financing in exchange for reforms. Photograph: John Thysjohn/AFP/Getty Images

Greece agreed last night to submit a fresh list of reforms “within days” to lenders, as the impasse between Athens and creditors continued amid signs that the Greek government could face a possible cash crunch by early April.

Speaking after the meeting, Dr Merkel said the meeting had been “good and constructive,” but warned that the government will have to meet commitments before it can access EU money. The Greek prime minister travels to Berlin for talks with Dr Merkel on Monday.

Mr Tsipras said he was “more optimistic” after the meeting.

“It is clear that Greece is not obliged to implement recessionary measures,” the 40-year-old Greek premier told reporters, referring to previously agreed reforms. “Greece will submit its own structural reforms, which it will implement.”

EU figures emphasised that the agreement of February 20th reached between Greece and the euro group of finance ministers still stood. A joint statement issued by European Council President Donald Tusk, European Commission chief Jean-Claude Juncker and eurogroup president Jeroen Dijsselbloem after the meeting, said that the eurogroup of finance ministers stood ready to reconvene “as soon as possible.”

“Within the framework of the eurogroup agreement of 20th February 2015, the Greek authorities will have the ownership of the reforms and will present a full list of specific reforms in the next days,” the statement said.

French president Francois Hollande said there “was no time to lose” for Greece to come forward with reforms.

The decision by European Council president Donald Tusk to convene a “mini-summit” on Greece on the margins of the two-day leaders’ summit was seen as a small victory for Alexis Tsipras, who had been pushing leaders to elevate discussion of the Greek issue to leaders’ level.

Despite granting a four-month extension to Greece on February 20th, the country’s international lenders have grown increasingly frustrated with the Syriza-led government about a perceived lack of progress in implementing reforms. Technical officials from the three creditor institutions - the European Commission, European Central Bank and IMF - began negotiations with Greece last week in Athens and Brussels.

Taoiseach Enda Kenny was among the most vocal critics of the Syriza-led government yesterday. “People are very encouraged to give Greece support and to give it its time and space to come forward with sustainable solutions, but there’s a difference between political argument and disagreement and threats of releasing jihadists and terrorists in Europe. That’s not acceptable,”

The Taoiseach was referring to recent comments from the Greek foreign and defence ministers who that an influx of “jihadists and terrorists” into Europe from Greece could be imminent, if bailout negotiations weren’t completed.

Speaking on his way into the summit, Mr Kenny said the issue had been discussed during a pre-summit meeting of EU leaders from the centre-right EPP group. “There was quite a deal of comment at the EPP meeting from some members about the strength of language used by our Greek colleagues,” Mr Kenny said, adding that “time is running out” for Greece.

“The feeling among the political leaders is that Greece and the Greek politicians have got to face up to their political responsibilities here. The ball is in their court. The prime minister asked for time and space and he was been given that to come forward with sustainable and workable proposals, and obviously Greece needs to reflect on that now as time is running out.”

Frustration is growing at EU level over the Greek Government’s apparent failure to propose specific reform measures since a temporary bailout extension was agreed on February 20th. On Wednesday the Greek government passed a controversial ‘anti-poverty’ bill in defiance of a European Commission request that the measure be reconsidered.

As EU leaders met in Brussels, Reuters reported that Greek banks saw deposit outflows of about €300 million on Wednesday. Up to €20 billion may have left Greek banks since November when uncertainty about the status of Greece’s bailout took hold according to some estimates. Greek bond yields continued to rise yesterday, with yields on 10-year bonds rising to close to 12 per cent, the highest level in almost two years.

Officials from the three creditor institutions negotiating with the Greek government about the terms of its bailout have reported difficulties in accessing precise information about the state of the Greek public finances. Greece faces debt repayments to the IMF and rollover of T-bills before the end of the month, as well as its regular commitment to pay public sector salaries and pensions.

EU Council President Donald Tusk’s decision to hold a select meeting on the margins of the EU summit irked some EU leaders, with the Belgian and Luxembourg prime ministers voicing their disapproval as they arrived at the summit yesterday.

But while Mr Tsipras scored a small victory by succeeding in his request for a special meeting on the fringes of the summit, the meeting yielded little for Greece in terms of concessions from lenders. Focus is now likely to turn to the Greek prime minister’s visit to Berlin on Monday - his first since assuming power in January.