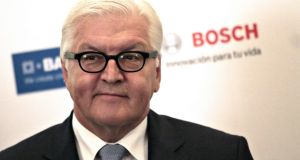 Germany’s foreign minister Frank-Walter Steinmeier says a Brexit would have serious consequences for the integrity of the European Union. Photograph: Pedro Pardo/AFP/Getty Images

After months of restraint, Berlin has ramped up its warnings over the consequences for Britain, the EU – and for Northern Ireland – should Britons vote to leave the union in two weeks’ time.

Finance minister Wolfgang Schäuble tells Saturday’s Der Spiegel that, despite claims by British MPs to the contrary, a Brexit vote would trigger an economic shock for Britain and lock it out of the single market.

German foreign minister Frank Walter Steinmeier, meanwhile, has conceded that a British departure would have serious consequences for the integrity of the bloc.

Asked if Britain could negotiate a Swiss or Norwegian associate agreement with the EU and enjoy the the single market from outside the bloc, Mr Schäuble told Der Spiegel: “That won’t work.”

“It would require the country to abide by the rules of a club from which it currently wants to withdraw,” he said. “If the majority in Britain opts for Brexit, that would be a decision against the single market. In is in. Out is out. One has to respect the sovereignty of the British people.”

The 73-year-old finance minister, a veteran of German and European politics, said it would be a “miracle if a Brexit didn’t bring economic disadvantages” for Britain. He also flagged the risk of instability for Northern Ireland.

“The conflict there was contained by the fact that Ireland and Britain are both members of the EU,” he said.

Dr Schäuble’s intervention in the British debate, in a special bilingual issue of Der Spiegel news weekly, is a radical departure from the cautious Brexit talking points employed in Berlin for the last months.

Chancellor Angela Merkel continues to watch her words in public, saying on Friday that the status quote was “the best and most desirable thing for us all”.

“We have very close co-operation on many questions with Great Britain,” she told a meeting of German family-owned businesses in Berlin, “and would of course like to continue this within the framework of the European Union. ’’

But Dr Schäuble and foreign minister Frank Walter Steinmeier, of the junior Social Democratic Party (SPD), agreed on Friday about the risks for a post-Brexit EU and further European integration.

“One reason why the integration process would be likely to falter is because the arguments we hear in Britain [by Brexit supporters] are also those heard in other parts of the EU,” said Mr Steinmeier.

Dr Schäuble agreed that it was impossible to rule out Brexit consequences for the remaining EU members, but said they would work closely to minimise them.

While Europe would, if it had to, function without Britain he agreed that it would be “crude” to mount an integration push after a Brexit vote. “One would rightfully wonder whether we politicians still haven’t understood,” he said.

Dr Schäuble’s British counterpart George Osborne welcomed the “major intervention” from Germany for clarifying that “the UK would have to accept free movement and pay in to EU to continue to access trade”.

Norway and Switzerland, often cited as models for a post-EU Britain, are not members of the EU but have access to the single market – but are also part of the Schengen free movement area.