Recently released footage shows U.S. allies carrying out a bombing airstrike against Islamic State in Syria. The clip shows the destruction of a Daesh fighting position near Manbij. 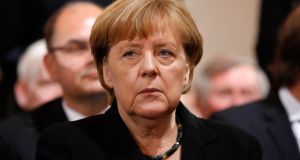 German chancellor Angela Merkel: Proposals, to be presented by her Christian Democratic Union next week, will reportedly include a ban on burkas and dual citizenship for non-EU citizens. Photograph: AP

The raids took place as Chancellor Angela Merkel’s Christian Democratic Union (CDU) moves to burnish its law-and-order credentials with proposals for more police, a ban on burkas and lower doctor-patient confidentiality in the case of serious terror threats.

Five co-ordinated searches took place early yesterday in western cities including Dortmund, Düsseldorf and Hildesheim, as well as a travel agency with a Turkish name in Duisburg.

The three suspects detained – but not yet arrested – are suspected of giving financial and logistical support to Islamic State, also known as Isis, and, between January and July 2015, recruiting supporters for the Islamist organisation.

The owner of the Turkish travel agency reportedly used his premises for lessons on Islamic doctrine and had contacts to two youths linked to a bomb attack last April on a Sikh temple in Essen that injured three.

Investigators described a second detained man as a “highly conspirative person” who distributes videos and publications through a smartphone app.

They said the raids were aimed at cracking down on Germany’s Islamist scene, including a mosque in Hildesheim believed to be a hotspot for jihadist Salafists. State politicians said the mosque was known for imams preaching “hate against non-believers”, and that at least 26 young people from the community had headed to Syria and other war zones.

Police said they had arrested another man and the second suspect linked to a concrete terrorist attack being planned in Germany.

“The goal was to go after Islamist supporters who agitate, recruit and radicalise,” said Ralf Jäger, interior minister of North Rhine-Westphalia. “Whoever thinks they can agitate here unchallenged and recruit young men for armed struggle in Syria . . . is mistaken.”

Federal interior minister Thomas de Maizière will today present new anti-terror plans in Berlin, including a reported proposal to allow doctors to break their oath of secrecy and report patients they view as a threat to public safety.

Other proposals, to be presented by the CDU next week, will reportedly propose a ban on burkas and dual citizenship for non-EU citizens.

A draft version of the CDU paper says dual citizenship, introduced in 2000 by the Schröder administration, poses a “great hindrance to integration” and must be reversed. “Whoever wants to engage in politics of foreign governments, we suggest they leave Germany,” the paper adds, a nod to a recent mass demonstration in Cologne in support of Turkish president Recep Tayyip Erdogan.

The CDU proposals, presented weeks before state elections next month, are unlikely to become law before next year’s federal poll.