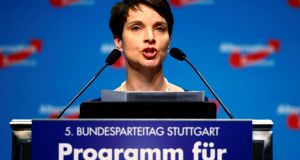 No to Islam and unregulated immigration, yes to border fences, greater national sovereignty in the EU and the “traditional family”.

Now sitting in half of Germany’s 16 state parliaments, and running third in weekend opinion polls with 14 per cent support, the AfD’s conference was a long-delayed effort to formalise its ideological identity.

But with a 78-page programme that runs the gamut from social conservatism to economic liberalism – with a strong emphasis on German nationalism throughout – Germany’s newest political party remains a collection of competing factions with no unifying leadership figure.

“We rammed home some important political pegs at this conference that differentiate us from other parties and I think it will be difficult for the other parties to deal with that,” said Frauke Petry, AfD co-leader and party head in eastern Saxony.

Admired by her partner, also an AfD leader, for her “demonic beauty”, Ms Petry remains a love-hate figure and is locked in a tense leadership job-share with Prof Jörg Meuthen, a moderate liberal from the southwest.

Lurking in the AfD background are tweedy conservatives and aristocratic pro-lifers with ambitions – and followers – of their own.

In the end, a marathon two-day party conference in Stuttgart failed to complete work on all 1,400-plus motions filed.

But the party that began life in 2013 as a euro bailout party before ousting its founder has now added immigration critical and anti-Islam strings to its political bow.

Delegates backed the motion that “Islam is not part of Germany”, and that an enlightened Islam is “neither realistic nor desirable”.

The party programme calls for a ban on mosque minarets, calls to prayer, full-face veils in general and headscarves in schools.

During an emotional and often chaotic debate, deputy leader Beatrix von Storch said the party “differentiated of course between political Islam and the Islam lived individually”.

But a proposal by one delegate that the party should focus on “stopping Islamism [and] seek dialogue with Islam” was rejected by the jeers and boos of delegates, some of whom linked the religion with “sharia, suicide bombings and forced marriage”.

Attacked as intolerant and extreme-right by Germany’s mainstream political parties, the gaps they have left in the political spectrum have been identified and filled by the AfD.

So too its positions on the EU: greater national sovereignty and opposition to Turkey’s membership of the bloc.

But the AfD has pulled in voters from across the political spectrum with calls for a euro exit, opposition to the TTIP transatlantic trade deal and for “protective barriers or similar, if necessary” to be erected on national borders.

Similar to other European populist parties, the AfD pushes a strong anti-elitist line, accusing “all-powerful” mainstream parties of “exploiting the state and endangering our democracy”.

But tensions remain, in particular on how conservative its social policy should be. Delegates rejected a push by AfD conservatives to tighten up German abortion laws but called for greater efforts to reduce terminations.

The programme also claims that schools have become a place of “political indoctrination” where children become the “plaything of the sexual preferences of a loud minority”.

The AfD rejects the “one-sided promotion of homo- and transexuality” and warns that the “traditional family image cannot be destroyed”.

Finally, the programme makes an energetic pitch for nationalistic-minded voters, demanding an end to the “narrow” focus on Germany’s Nazi past in favour of a “broader historical view”, adding: “We are open to the world but want to be, and remain, Germans.”

But, just as the AfD has stepped up its political challenge to Germany’s political mainstream in Stuttgart, left-wing extremist groups have cranked up their campaign against the new party.

Police used tear gas to hold off hundreds of black-clad protesters from the party conference hall, while hackers published online addresses and phone numbers of all 2,400 delegates.

1 Reopening of pubs that do not serve food may be delayed beyond July 20th
2 Miriam Lord: Paschal’s win makes Phibsboro the financial capital of Europe
3 Brightest comet of the century visible in Irish skies for the next week
4 Hundreds of substitute teachers may be hired full-time to keep schools open
5 Non-wearers of masks on public transport face fine and jail sentence
Real news has value SUBSCRIBE