Germanwings timeline: the last minutes of the doomed flight 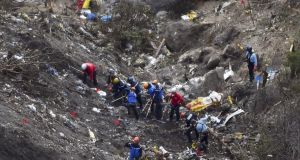 French police and investigators working through the scattered debris on the crash site of the Germanwings Airbus A320, in the French Alps near the southeastern town of Seyne. Photograph: Anne-Christine Poujoulat/AFP/Getty Images

Germanwings flight GWI18G on Tuesday, March 24th, 2015, was scheduled to fly from Barcelona to Düsseldorf, with six crew members (two flight crew and four cabin crew) and 144 passengers on board.

The same crew had made the outbound flight, taking off from Düsseldorf at 6.01am and landing in Barcelona at 7.57am.

Investigators said the co-pilot Andreas Lubitz deliberately crashed the Airbus A320 in the French Alps with the loss of everyone on board.

The timeline is based on the preliminary report into the crash by the French authorities using the flight recorders and recordings of radio communications. Times are in hours, minutes and seconds.

09:02:54 Autopilot engaged in “CLIMB’’ and “NAV’’ mode; autothrust had been engaged about a minute earlier.

09:12:15 During the climb, the buzzer to request access to the cockpit sounds for one second. Flight attendant enters cockpit and the three crew talk about how the stop at Barcelona had gone.

09:15:53 Flight attendant leaves the cockpit. Captain and co-pilot discuss managing the delay that resulted from late departure from Barcelona.

09:27:20 Aircraft levels off at a cruise altitude of 38,000 feet. The flight is in contact with the Marseille control.

09:30:00 The captain reads back the controller’s clearance allowing him to fly direct to the IRMAR aviation waypoint on its route northwards to Germany: “Direct IRMAR. Merci Germanwings. One Eight Golf’’. This was the last communication between the flight crew and air traffic control.

09:30:08 Captain tells co-pilot he is leaving the cockpit and asks him to take over radio communications, which the co-pilot reads back.

09:30:11 The heading starts to decrease and stabilises about a minute later, consistent with a route towards the IRMAR point.

09:30:53 Selected altitude is changed in one second from 38,000 ft to 100 ft. One second later, the autopilot and autothrust are changed. The aircraft starts to descend and both engines’ rpm decrease.

09:33:12 The speed management is changed from “managed” mode to “selected” mode. A second later, the selected target speed becomes 308 knots (kt), while the aircraft’s speed was 273kt. The aircraft’s speed starts to increase along with the descent rate, which subsequently varied between 1,700 ft/min and 5,000 ft/min; then was on average about 3,500 ft/min.

09:33:35 Selected speed is decreased to 288kt. Over the following 13 seconds, the value of this target speed is changed six times until it reaches 302kt.

09:33:47 Air traffic control asks the flight crew what cruise level they are cleared for. The aircraft was then at an altitude of 30,000 ft in descent. There was no answer from the co-pilot. Over the following 30 seconds, the controller tries to contact the flight crew again on two occasions, without any answer.

09:34:23 The selected speed is increased to 323kt. The speed was then 301kt and started to increase towards the new target.

09:34:31 The buzzer to request access to the cockpit sounds for one second.

09:34:38 The controller again tries to contact the crew, without any answer.

09:35:03 The selected speed is increased again to 350kt. Subsequently, and until the end of the recording: the selected speed remains at 350kt and speed stabilises at about 345kt; the autopilot and autothrust remain engaged.

09:38:38-09:39:23 French Air Defence system tries to contact the flight crew on three occasions without any answer; there are also noises similar to violent blows on the cockpit door on five occasions between

09:39:54 Crew of another aircraft tries to contact Germanwings flight, without any answer.

09:40:41 “Terrain, Terrain, Pull Up, Pull Up” aural warning sounds and remains active until the end of the flight.