Schaeuble says he and Merkel ‘have one constant: we ... can rely on one another’ 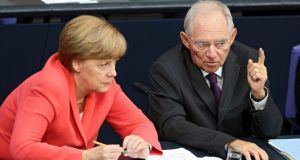 German economy minister Sigmar Gabriel criticised finance minister Wolfgang Schaeuble in a television interview to be broadcast later on Sunday for suggesting that Greece could quit the euro zone temporarily.

Mr Schaeuble has said that Greece could take a five-year “time-out” from the euro zone to address its economic problems, but Gabriel hit out at the idea in a sign of rising tension within the coalition between his Social Democrats (SPD) and Chancellor Angela Merkel’s conservatives over the Greek debt crisis.

Mr Gabriel also said that Mr Schaeuble was in a “huge conflict” with Ms Merkel, who has said that a temporary Greek exit from the euro zone would not work.

Mr Schaeuble said in an interview published in Der Spiegel magazine on Saturday that he and the chancellor were “on the same path”, even if they did not always share the same opinions.

He also downplayed differences with Ms Merkel suggesting he would resign if there were serious ones.

“Angela Merkel is the chancellor, I am the finance minister. Politicians derive their responsibility from their offices. Nobody can force them. If somebody would try that, I could go to the president and request my dismissal,” he said in the interview.

Asked if he had planned to resign because of the Greek crisis, the veteran German politician said: “No. Where did you get that idea?”

“Ms Merkel and I have one constant: We know that we can rely on one another,” he said.

Mr Gabriel, a member of Ms Merkel’s conservatives, said Mr Schaeuble had provoked the SPD, their junior coalition partner, with the suggestion of a temporary euro zone split for Greece.

“I’d say one should have done that differently, especially as he knew that we Social Democrats are only prepared to talk about Greece leaving the euro zone solely in the case that the Greeks want that themselves,” Mr Gabriel said.

While Mr Schaeuble has said the proposal was agreed with the coalition partner, SPD leader Mr Gabriel said he had learned about the details of the proposal only after it had been floated in negotiations in Brussels.

Mr Gabriel rejected international criticism of Germany over its role in the Greek crisis, saying accusations that Berlin’s stance was too tough were not appropriate: “I think that’s an unfair judgment. Germany has made a big contribution to all packages and has taken on big risks.”

The struggle over Greece’s latest debt deal has nevertheless exposed growing rifts within the euro zone.

Mr Gabriel said it would be wrong to take on risks related to Greece without asking the country to make changes because Italy, Spain and Portugal would then have to receive the same treatment and “the euro zone could not survive that”.

He said there was a good chance Athens would implement the reforms. “Then it will be proved that this path is right,” he added.