Eyewitnesses describe what they saw as a Syrian migrant sets off a bomb in the German town of Ansbach. Video: Reuters 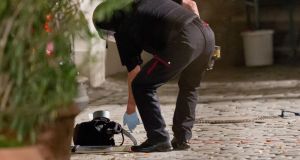 A police officer in protective gear inspects a back pack used to carry an explosive device at the scene of a suicide attack in the southern German city of Ansbach on Monday. Photograph: AFP 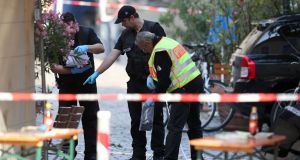 Police investigators work at the site of a suicide bombing. Photograph: AFP 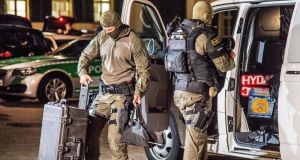 Specialist police officers arrive at the scene after an explosion occurred in Ansbach, Germany on Monday. Photograph: AP

Bavarian authorities say they have found violent Islamic State videos on a mobile phone and laptop belonging to a 27 year-old failed Syrian asylum seeker who blew himself up and injured 15 on Sunday evening.

The Islamic State group has also claimed responsibility for the suicide attack . The Aamaq news agency that is linked to IS said the attack was carried out by “one of the soldiers of the Islamic State.”

Aamaq said on Monday that the man carried out the attack in response to calls by the group to target countries of the US-led coalition.

Shortly after 10pm in the Bavarian city of Ansbach, a man identified only as Mohammad D, detonated explosives in a rucksack after being refused entry to a music festival for not having a ticket.

Bavarian minister president Horst Seehofer said the attack was another “day of terror” in the state - the third in a week.

“Our sympathies go out to the injured of this perfidious and brutal bomb attack in Ansbach,” said Mr Seehofer. “Our constitutional order will not yield.”

A welfare official in Ansbach, a small town of 40,000 in Bavaria’s northern Frankonia region, said the man had been “friendly and nice”.

“The young man was often here as an asylum seeker and was known to us,” said Mr Reinhold Eschenbacher to the Süddeutsche Zeitung daily.

Bavarian officials said the nature of the rucksack bomb - explosive and sharp metal pieces - was designed to injure as many as possible.

After a raid of an Ansbach asylum home, police found two mobile phones, SIM cards and a laptop which they said contained violent Islamic State videos.

Bavaria’s justice minister, Winfried Bausback wrote on Facebook that “Islamist terror had reached Germany” with this attack and that it was now essential to “adapt accordingly”.

Ahead of the Isis video find, federal officials in Berlin declined to speculate on a motive.

Speaking ahead of the Islamic State’s claim of responsibility, Berlin officials said there were “no firm clues” that the Ansbach attack had links to Islamist extremism. and called for “forbearance from all those involved”.

“The investigations are continuing at high pressure and I hope we can soon have clarity about the perpetrator’s motive,” said Mr Thomas de Maizière, federal interior minister.

One eye witness told Germany’s Sat-1 television how he heard a loud bang while a band was playing.

“A security man ran to the entrance, two people lay on the ground with head and throat injuries,” said Kevin Krieger. “I tried to calm them, the police cleared the area, nobody shouted ... It was like an explosion, really loud, you could feel it on your whole body.”

At first police in the Baroque city of Ansbach, anxious not to stir up already unstelled public, spoke of a gas explosion.

But at a press conference at 3am, police admitted that they “can’t rule out that it was a radical extremist, though there is no evidence of this”.

Investigators said the perpetrator of the latest attack was known to police because of two previous suicide attempts and drug confictions, but had no extremist profile. He came to Germany from Syria two years ago but had his asylum application refused last year.

He remained in the country because Germany only returns failed asylum applications to civil war zones, such as Syria, in extreme cases. A Bavarian official confirmed at lunchtime on Monday that the man was due to be deported to Bulgaria in the coming weeks, but could not say why the deportation had not taken place.

After concluding their forensic search of the attack scene, police this morning raided a local refugee facility where the man lived for a time.

As Germany wakes up to its fourth bloody attack in a week, senior police officials said it was important that “politicians hold their nerve and not stir up rumours”.

“It’s important all investigations are concluded calmly and professionally,” said Mr Rainer Wendt, head of Germany’s police union. “Nothing can be covered up but nothing should be exaggerated, the population must be kept calm.”

A week ago a 17 year-old refugee believed to be from Afghanistan launched an axe and knife attack on passengers on a regional train nearby in Würzburg.

After the attack IS later claimed the teenager, shot dead by police, was one of their combatants On Friday, an 18-year-old gunman shot dead nine people and left over 30 injured before taking his own life near a Munich shopping centre. Sunday saw a machete attack by a Syrian man, killing a woman, in neighbouring Baden-Württemberg.

The attacks have sparked a debate in Germany about whether the country, with the world’s fourth biggest gun ownership per capita, needs tighter weapons on owning weapons.

And the Bavarian state government, rattled by its third bloody attack in seven days, has floated the idea of ending post-war restrictions on domestic deployments of the Germany army, the Bundeswehr.

Germany’s post-war constitution allows for military domestic deployments only in limited cases, such as to assist in the case of natural disasters.

But Mr Hermann, Bavaria’s interior minister, suggested the time had come to review limits imposed to prevent a repeat of military abuses during the Nazi era.

“We have an absolutely stable democracy,” he said. “It would be absolutely incomprehensible ... If we had a terrorist situation like Brussels in Frankfurt, Stuttgart or Munich and were not permitted to call in the well-trained forces of the Bundeswehr, even though they are standing ready.”

His remarks to the Welt am Sonntag newspaper were made after Monday’s axe attack but before Friday’s shooting in Munich. Even with a rising fear of Islamist violence in Germany, however, many German politicians rushed to criticise the remarks.

Some suggested it would only be permissible to allow domestic army deployments if they took place under police, and not military, command.