‘Refugees are people like you and me,’ star says after presenting humanitarian Aurora Prize

George Clooney draws comparisons between the Irish potato famine and the migrant crisis of today as he presents the Aurora Prize in Yerevan. Video: Reuters 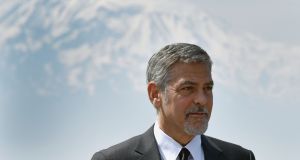 US actor George Clooney poses with Ararat mountain in background, as he attends a ceremony at the Armenian genocide memorial in Yerevan. Photograph: Karen Minasyan/AFP/Getty Images

Refugees are “people, like you and me”, Hollywood star George Clooney has said during a speech in Yerevan, Armenia.

“The Clooney family fled a famine in Ireland to come to the United States where their very survival required a room, a meal, a helping hand,” he told attendees at the inaugural humanitarian Aurora Prize ceremony.

“We call them refugees, but they’re just people, like you and me. And if you stand right in front of them and take a look deep into their eyes, you might just see an Irish farmer fleeing a famine.”

Marguerite Barankitse from Maison Shalom and REMA Hospital in Burundi was named as the inaugural laureate of the $1 million prize.

Ms Barankitse was recognised for the extraordinary impact she has had in saving thousands of lives and caring for orphans and refugees during the years of civil war in Burundi.

As she accepted the award from Clooney, the Aurora Prize Selection Committee co-chair, Ms Barankitse said: “Our values are human values. When you have compassion, dignity and love then nothing can scare you, nothing can stop you – no one can stop love. Not armies, not hate, not persecution, not famine, nothing.”

As the first Aurora Prize Laureate, she will receive a $100,000 grant and continue the cycle of giving by donating the accompanying $1 million award to organisations that have inspired her work.

Ms Barankitse plans to donate the award to three organisations in order to advance aid and rehabilitation for child refugees and orphans, and fight against child poverty.

She saved thousands of lives and cared for orphans and refugees during the years of civil war in Burundi. When war broke out, Ms Barankitse, a Tutsi, tried to hide 72 of her closest Hutu neighbors to keep them safe from persecution. They were discovered and executed, whilst Ms Barankitse was forced to watch. After that she started her work saving and caring for children and refugees. She has saved roughly 30,000 children and in 2008, she opened a hospital which has treated more than 80,000 patients to date.