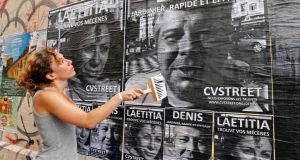 Laetitia, a 30-year-old unemployed Frenchwoman and member of CVStreet group, uses a brush to paste posters of herself and others unemployed people in the streets of Marseille. The main idea is to break the anonymity for the unemployed by posting their portraits in the street.

French governments have struggled with the jobless young issue since 1977, when then prime minister Raymond Barre launched the “pact for youth employment”.

For 36 years, most efforts have concentrated on state-subsidised jobs, which account for a quarter of youth employment today. Though these are often decried by conservatives, the right too has resorted to emplois aidés. Nicolas Sarkozy renewed the practice when the crisis started in 2008, creating 550,000 subsidised jobs in 2010.

France created 440,000 emplois aidés last year. That will increase to 540,000 this year, with the additional 100,000 being reserved entirely for disadvantaged youths.

French leaders have learned two things from decades of dealing with joblessness: never admit impotence; and do not attempt to address youth unemployment by proposing less than minimum wage.

The conservative prime minister Dominique de Villepin precipitated mass street demonstrations, and destroyed his own career, when he attempted to enforce a cut-rate contrat premier emploi for the young in 2006. Six years earlier, then socialist prime minister Lionel Jospin probably doomed his chances of becoming president. Faced with lay-offs at a Michelin factory, Jospin admitted “the state cannot do everything.”

In light of these precedents, the admission by labour minister Michel Sapin on June 23rd was surprisingly frank. “Nobody believes that we will resolve unemployment over the medium or long term with subsidised jobs!” he said. “But while growth is stalled, what can we do?”

No French government, left or right, has dared to make the structural reforms that might alleviate unemployment – namely lower labour costs, simpler regulations and less-generous compensation for the jobless. In the absence of an overhaul, the government buys social peace and massages the unemployment figures with subsidised jobs.

Origin of parents
The prevalence of youth unemployment among the descendents of immigrants from France’s former colonies is a delicate topic, rarely addressed head-on. Repeated studies have shown job applicants with an African or Arab name, or an address in “le neuf trois” – the Seine-Saint-Denis department north of Paris – are extremely unlikely to find employment.

“If you haven’t got connections, you’re dead,” a youth named Malik in a banlieue north of Paris told Le Monde’s reporter Pascale Krémer. “For the young in the housing projects, there’s only dog work. If you do short-term work, they exploit you completely. We have self-respect. We were born here. We went to school. We’re not going to pick up people’s shit like our parents did.”

The result, says sociologist Cécile van de Velde, is “a form of social pathology” in which jobless French youths are “like beached boats. With the rules stacked against them, they withdraw from the game. It’s a form of resistance, and of self-protection.”

Back in 1967, president Georges Pompidou warned that if France ever reached half a million jobless “there will be a revolution”. Total unemployment in France now stands at 3.26 million. The revolution hasn’t happened, but there’s a constant fear that the banlieues could explode at any moment, as they did in the autumn of 2005 when two African teenagers died accidentally while fleeing police.

Areas in need
Attempts to address youth unemployment seem to succeed least where they are most needed. For example, only 165 contracts for “jobs of the future” had been signed in the Seine-Saint Denis department by the end of April, though the government has budgeted for 2,754 such jobs there this year.

Of the 22,500 “jobs of the future” signed by the end of May, 15 per cent were in the zones urbaines sensibles (sensitive urban zones or Zus). The government wants 30 per cent of these subsidised youth jobs to be attributed to the Zus . Isolated “rural revitalisation zones” are another priority.

The vast majority of the youth contracts signed this year are in the non-commercial sector: 39 per cent with local governments; 38 per cent with associations, and 7 per cent with public establishments. It is not the least contradiction of the Hollande administration that these government-financed jobs are being created as the state auditor urges the government to shed 10,000 civil servants a year.

“These jobs are often a trampoline for entering local government,” explains an adviser to the labour minister. “After one to three years, they’re hired permanently, either through a competitive exam or recruited directly. The local governments know who’s going to retire, so they can plan ahead for things like landscaping and sports programmes.”

“Jobs of the future” contracts are negotiated and signed in the missions locales, the 30-year-old network of offices established across France to assist young people in difficulty. Their staff have been beefed up to administer this newest government programme. Meanwhile, the Pôle emploi (job centre) administration is adding 2,000 permanent jobs to its staff of 53,000, to handle the flow of jobseekers.

Stifled by complexity
Bureaucracy and regulations impede the smooth functioning of the government programmes. For example, the “contract between generations” – which gives financial aid to companies that hire a youth while keeping an employee over 50 on the payroll – works well in companies with less than 50 employees, where management can simply fill out the form and apply for their €4,000 allotment.

The plan has been slower to take off in companies employing between 50 and 300 employees, because they must first negotiate an in-house agreement between trade unions and management. Companies employing more than 300 people are not eligible for financial aid, but must nonetheless put an agreement in place.