France on high alert after man decapitated in attack

‘It is a terror attack. There is no doubt about it’, says President Francois Hollande

French President Francois Hollande says an attack that morning in southeast France was of 'a terrorist nature' and that a suspect had been arrested and identified. Video: Reuters

Police cordon off the scene of an attack on a gas factory in Saint-Quentin-Fallavier, France. Video: BFMTV 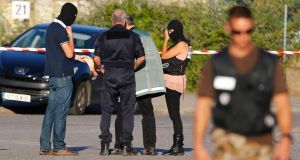 French police officers stand outside a transport and delivery company during investigations in Chassieu, near Lyon, France, into a terror attack. Photograph: Reuters/Ruben Sprich 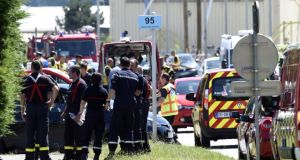 The Air Products company in Saint-Quentin-Fallavier, where an attacker carrying an Islamist flag killed one person and injured several others. Photograph: Getty 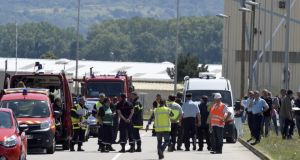 French police and firefighters at the entrance of the Air Products company in Saint-Quentin-Fallavier, near Lyon, where an attacker carrying an Islamist flag killed one person and injured several others. Photograph: Getty 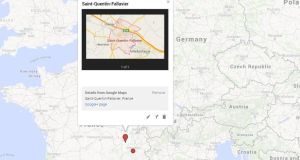 France has raised its security alert to the highest level after police discovered a decapitated body and flags with Arabic inscriptions following an attack in which a man seemingly tried to blow up a factory belonging to a US gas company.

A suspect arrested at the scene at Saint-Quentin-Fallavier, near Lyon in south-west France, was named by the French prosecutor as 35-year-old Yassin Salhi, an employee at a transport company run by the victim. The suspect was known to people at the Air Products factory because he came in regularly for deliveries, the prosecutor said.

The victim’s head was found hanging on a fence next to two inscribed flags, with the rest of his body inside the factory.

The attack began when the vehicle made it through the gate of the US-owned factory in Saint-Quentin-Fallavier, southeast of Lyon.

The vehicle then ploughed into gas canisters, touching off the blast, president Francois Hollande said in Brussels, where he was attending a European Union summit.

“No doubt about the intention – to cause an explosion,” Mr Hollande said, calling the attack “of a terrorist nature”.

The French president later raised the security alert for the southeastern region to its highest level for the next three days.

No group immediately claimed the attack, but the severed head appeared to mimic the Islamic State group’s practice of beheading prisoners and displaying their heads for all to see. The man’s body was found elsewhere on the grounds.

A security official said two flags – one white and one black, both bearing Arabic inscriptions – were found nearby.

Interior minister Bernard Cazeneuve said the main suspect – a man from the Lyon region who had been flagged in 2006 for suspected ties to radical Salafists – was seized by an alert firefighter. Mr Cazeneuve said the suspect had been known to intelligence services, who had him under surveillance from 2006 to 2008.

A police official said the man in custody, Yassine Salhi, is in his 30s and a resident of the Lyon suburb of Saint-Priest.

As French police investigated the attack, at least 28 people including an Irish woman were killed in an apparent terrorist attack at a hotel in Tunisia.

The Irish Times understands the Irish women is in her 50s and from the Robinstown area of Co Meath.

In Kuwait, a suicide bomber at a Shiite mosque left 25 people dead, while al-Shabaab militants killed 30 peacekeepers in Somalia.

Officials said the decapitated man ran a local transportation company that employed Salhi. One official said he was believed to have been killed before the attack on the factory and was not killed by the explosion.

Three other people, including Salhi’s wife, were taken into in custody.

Paris Prosecutor Francois Molins said Salhi was known to factory personnel because he came in regularly for deliveries. The attacker entered the factory grounds in a utility truck, then crashed the vehicle into a hangar at the site, prompting an explosion.

Mr Molins said the attacker, his wife, sister and another suspect are in custody. He said investigators are trying to determine whether there are accomplices.

The gas factory belongs to Air Products, a US chemical company based in Pennsylvania. The company said all its employees had been accounted for and were evacuated from the premises but did not say if any had been injured.

“The site is secure. Our crisis and emergency response teams have been activated and are working closely with all relevant authorities,” the company said in a statement.

Air Products makes gases used by a wide range of industries, including food production, medicine and oil and gas. It has more than 20,000 employees in 50 countries, mostly in the Americas, Europe and Asia.

One official said the suspect apparently miscalculated how explosive the chemicals he smashed into would be, but Mr Hollande said a major explosion appeared to be the goal.

France went on high alert in January after attacks against the satirical newspaper Charlie Hebdo, a kosher grocery store and a policewoman that left 20 people dead in the Paris region, including three Islamic extremist attackers.

Since then, fears of copycat attacks have risen. One person was arrested in April after authorities said he was plotting to gun down people in churches in the Paris region.