Forty years since Franco: how Spain has reinvented itself 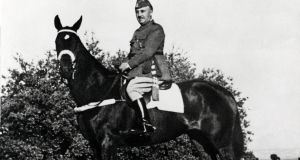 An undated picture of General Francisco Franco riding his horse. Towards the end of his regime, Franco had started to open the country up to tourism and international trade, but in many ways Spain’s economy was still lagging behind its European neighbours. Photograph: AFP/Getty Images

The sun is going down over the Valley of the Fallen, the huge mausoleum north of Madrid where the dictator Francisco Franco is buried and the last visitors are starting to leave. For some, this is a place of worship. But most of those who come here do so out of curiosity and to admire the stunning view across a wooded valley to the Guadarrama mountains beyond.

Franco died on November 20th, 1975, after ruling Spain for 36 years. Only a small minority of Spaniards are nostalgic for his regime. But with the country still recovering from its worst recession in decades, there are those who miss the economic stability of that era.

Others are less rueful. “We’re better off than our parents, definitely,” says Sonia Fernández (28). “They had a different lifestyle to us, they didn’t travel as much as we do, they didn’t go out at night as much.”

What Herrera and Fernández do agree on is that Spain has been transformed in the four decades since Franco’s death.

Towards the end of his regime, Franco had started to open the country up to tourism and international trade, but in many ways Spain’s economy was still lagging behind its European neighbours, with an emphasis on farming and heavy industry.

“We don’t have energy, we don’t have raw materials,” says Alejandro Bengoa, general manager of IK4 Tekniker, one of many Basque firms that develop cutting-edge industrial processes. “I can’t imagine the Basque economy not being based on strong industry. So if we hadn’t made that change [to technology] 30 years ago, we would probably be in trouble now.”

The single-mindedness of that shift means that the Basque region, with a population of only two million, is now the world’s eighth-biggest exporter of machine tools and its technology sector generates around €20 billion per annum.

But other parts of the country have a very different profile.

Andalusia has relatively little industry of any kind and agriculture remains a major pillar of the local economy. Hobbled by lack of modernisation, an antiquated subsidy system and political corruption scandals, this sprawling southern region has a per capita GDP of €17,000, about half that of the Basque Country.

Such disparities have inevitably led to tensions over Spain’s economic model, such as the current drive for independence by the wealthy Catalan region.

Philosopher Javier Gomá recalled that around that time “Spaniards surprised themselves by having so much money in their hands, although it was not real money, because it wasn’t the fruit of their work and of saving up and those kinds of virtues, but rather it was the fruit of European solidarity”.

It couldn’t last. The dramatic economic crisis sparked by a burst property bubble in 2007 and the ensuing austerity have dampened Spaniards’ love affair with the EU. While the country is now restoring order to its public finances, many of the social repercussions of the crisis continue to bite, such as high unemployment and the eviction of families who fail to keep up mortgage payments.

Having pushed for a place at the top table of world economies for much of the 2000s, recently Spain has had to take a more modest view of itself.

But the country can still point to countless ways in which it has reinvented itself since 1975. It has a stable of multinational giants, such as Santander bank, clothing retailer Inditex, and energy firm Repsol; it has the second-largest high-speed rail link in the world, after China’s; Spaniards have the world’s seventh-longest life expectancy; and while a married woman could not even sign a contract without her husband’s permission under Franco’s chauvinist regime, today 46 per cent of the workforce is female.