Court hands down five years and €375,000 fine to politician who almost won presidency 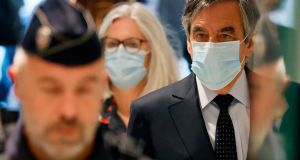 François Fillon, who was prime minister of France from 2007 until 2012, was on Monday convicted of misappropriation of public funds by a person invested with public authority and complicity in fraud and possession of the proceeds of fraud.

Fillon, aged 66, was sentenced to five years in prison, of which three years are suspended. He was ordered to pay a €375,000 fine and made ineligible for public office for a decade.

Fillon, his Welsh-born wife Penelope, and Marc Joulaud, the assistant who replaced Fillon as a deputy in the National Assembly when Fillon was in government or in the Senate, were also ordered to repay more than €1 million in public funds for bogus work contracts.

The couple’s lawyers called the verdict “unfair” and “severe” and announced they will appeal. Fillon remains free in the meantime.

In January 2017, the satirical weekly Canard Enchaîné revealed that Fillon had for many years used parliamentary allowances for the employment of assistants to remunerate his wife and children. It was not illegal for deputies and senators to employ family members, but it was illegal to pay them to do nothing.

Were it not for the Canard’s revelations, Fillon would almost certainly be president of France today. His February 26th–March 11th trial corroborated the newspaper’s reports.

“The procedure established that . . . François Fillon designed and put in place, through the employment of his spouse and his children, either by himself or by his replacement, an organisation which enabled him to divert to his personal profit the near totality of the credits for assistants,” Judge Nathalie Gavarino read in the court’s conclusions.

The Fillons’ lawyers tried to have the case reopened after a now retired prosecutor said on June 11th that she had come under pressure to speed up judiciary proceedings in the case.

If, as prominent members of the conservative party Les Républicains claim, Fillon’s prosecution was the result of a conspiracy to prevent him becoming president, the country could be plunged into institutional crisis, since Emmanuel Macron’s election would arguably have been illegitimate.

Between 1998 and 2013, funds paid fraudulently to the Fillon family by the National Assembly, the Senate and the Revue des Deux Mondes, a literary journal owned by a billionaire friend of Fillon, amounted to €1,155,701, Judge Gavarino said.

Fillon did not flinch or show any reaction during the 45-minute court session. He may have honed nerves of steel driving in the Le Mans 500 car race, which is organised by his brother Pierre, or serving as prime minister to Nicolas Sarkozy, with whom he was often in conflict.

The court’s conclusions read like a lecture on public morality. “François Fillon failed not only in his duty of probity, which should have been irreproachable given that he was an eminent representative of the executive and legislative branches, but also in the exemplarity which is supposed to characterise the positions he held,” Judge Gavarino said.

“By placing his personal interest above the common interest, he helped to erode the confidence that citizens place in those they elect to act in their name, to represent them and govern them.”

Penelope Fillon was given a three-year suspended prison sentence, fined €375,000 and made ineligible for public office for two years. She has been a town councillor in Solesmes, where the Fillons own a 15th century manor, since 2014.

The trial established that Ms Fillon and Joulaud were passive participants in the financial corruption for which they were on Monday convicted.

“Madame Fillon did not initiate the contracts,” the judge read. “But she knew the incompatibility between the remuneration received and work performed. She knowingly accepted work contracts that had no reality, whether it was as a parliamentary assistant or as a literary adviser, and this over long periods. Furthermore, she knowingly benefited from sums paid to her children.”

The Fillons’ children, Charles and Marie, were not prosecuted because they gave their parents the funds they received as bogus assistants to François Fillon when he was a senator.

Joulaud, an English teacher by training and now the mayor of Sablé-sur-Sarthe, was also convicted of misappropriation of public funds by a person invested with public authority. “Monsieur Joulaud did not initiate [Penelope Fillon’s] contract, but he knowingly accepted that public funds be used to remunerate a parliamentary assistant whose job corresponded to no need and which he knew to have no reality,” the judge said.

Joulaud did not enrich himself personally, “but he remained Mr Fillon’s replacement, occupied his [deputy’s] seat for a second legislature and thus consolidated his local political career” the judge said when she handed down a three-year suspended sentence and made Joulaud ineligible for public office for five years.

Members of the public confirmed Judge Gavarino’s contention that Fillon betrayed public trust. Raphael, a 15-year-old lycée student, called Fillon’s conviction “magnificent”. Anje, a teacher aged 47, said she attended the trial because she was “horrifed” on reading Apocalypse Now: The Fillon Years, The Secret History of the French Right, by Gérard Davet and Fabrice Lhomme, investigative reporters for Le Monde.

Outside the courtroom, a distinguished-looking woman with grey hair could barely contain her anger. “He got off too lightly,” she said. “Most of the money he stole was taxpayers’ money, MY money. I want to see him in prison.”

1 Miriam Lord: Minister for Agriculture tries to get himself out of the manure
2 How fraudsters used lockdown to lure Irish victims into boats and caravans scam
3 Taoiseach rules out united Ireland referendum as ‘divisive’
4 Martin criticises ‘over-focus’ on Border poll ahead of Foster meeting
5 Barry Cowen tells Dáil he is profoundly sorry for ‘stupid’ drink-driving offence
Real news has value SUBSCRIBE