Police still to question Francisco Garzón, who has been under arrest since Thursday 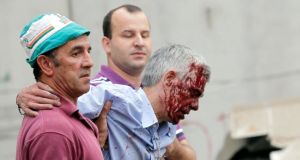 The focus of the investigation into Spain’s worst rail crash for 40 years will turn on the train’s driver today as police hope to question Francisco Garzón, who has been under arrest since Thursday evening but has not yet been interviewed because of his medical condition.

He is under arrest in a hospital on suspicion of recklessness while driving the train.

The Spanish justice department today he will not be appearing before a judge today as had been hoped. A statement said the intention now is to wait until Mr Garzón is able to appear in court, rather than having a judge go to his hospital bedside.

At least 78 people died in the incident in which the high-speed Alvia 151 train careered into a sharp curve at more than twice the permitted speed before hurtling off the tracks. By last night, 31 were critically ill in hospital, some of them in comas.

Antonio del Amo, head of the Spanish national police’s central forensic unit, said six of the bodies recovered from the wreckage had yet to be identified.

Brakes
Yesterday, more reports of Mr Garzón’s actions leading up to the crash began to emerge. The daily El Pais reported that the experienced 52-year-old driver had received an order to reduce speed just seconds before the crash and had acknowledged it by pressing a button in the driver’s cab.

It remained unclear whether he had been unable or unwilling to apply the brakes on the train, which was running five minutes behind schedule.

A stream of leaked extracts from recorded conversations immediately following the disaster suggested that Mr Garzón held himself responsible for what had happened.

While still trapped in the cockpit of his train he was reported to have told the emergency service of the state-owned train operator Renfe: “I hope there are no dead, because they will be on my conscience.”

The Spanish news agency Europa Press reported that during the same conversation the driver had said: “I’ve f**ked it. I want to die.”

Contacted by telephone in hospital by the regional newspaper, La Voz de Galicia, Mr Garzón refused to comment beyond saying: “You imagine how I am.”

Details also began to emerge of Mr Garzón’s life. He is a lifelong railwayman and native of Galicia, living in the city of A Coruña with his widowed mother who lost her other son in a car crash. But he was born in Monforte, an important regional rail centre, and has a flat there. The son of a railway worker, Mr Garzón was brought up in housing built for railway workers and went to a school run by Renfe. It was in Monforte, about 110km inland from Santiago de Compostela, that he began working for the company in his early 20s.

He had 10 years’ experience as a driver and Renfe’s president, Julio Gomez-Pomar Rodriguez, said Mr Garzón had worked on the Ourense to Santiago line, where the incident took place, for more than a year.

Before returning to his native Galicia, he had worked on the line between Madrid and Barcelona, which is served by so-called AVE trains that can reach speeds of 310km/h.

Julia Morais, a friend of his own age in his home town of Monforte de Lemos, told Reuters: “He was sensible and very good at his job. We don’t know what could have happened.”

Mr Garzón’s professionalism appeared to have been compromised by the discovery of a photograph he posted to his Facebook page showing his speedometer at 200km/h. However, as a driver of high-speed trains he may have been on a stretch of the network where such a speed is permitted. The photograph was posted onMarch 8th, 2012. It nevertheless surprised Mr Garzón’s friends. One wrote: “You’re going like the bloody clappers, lad. Brake.”

Mr Garzón is suspected of criminal recklessness, but has not yet been charged. Spanish rail experts have argued that mere negligence cannot explain the crash: that the “black boxes” recovered from the train will show that a technical fault was partly – or perhaps entirely – to blame for what happened. Mr Garzón reportedly tested negative for alcohol following the crash.

Mr Garzón was led from the scene of the tragedy with his face covered in blood, and given nine stitches to a head wound, but appeared otherwise uninjured. – (Guardian service)