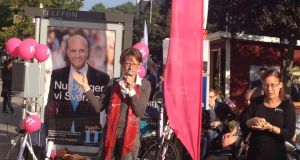 For two decades the fiery 66-year-old Gudrun Schyman has been a famous, even notorious, figure in Swedish politics.

Gudrun Schyman’s stump speech is in full flow in the pedestrian zone of Solna, north of Stockholm, when the black Volvo estate noses its way through the listening crowd. “Ah yes,” she remarks, “a single man in a big car.” The crowd chuckles at her acidic ad lib.

For two decades the fiery 66-year-old has been a famous, even notorious, figure in Swedish politics. After heading the Left Party for a decade until 2003, she hopes to re-enter parliament on Sunday as head of the Feminist Initiative (FI). The small party has backers including actor Jane Fonda and Abba founder Benny Andersson and aims to bring third-wave feminism to Swedish politics.

Their argument to Swedes: you are not as liberal, egalitarian and tolerant as you’ve been made to think you are. For outsiders their mission seems like a long shot.

This is Sweden, the land of subsidised day care and paternity leave, dubbed the world’s most gender-equal country in 2006 by the World Economic Forum. But it has slipped to fourth place behind other Nordic countries, FI campaigners point out. Swedish women still earn almost 6 per cent less than men in similar roles.

“We Swedish women were raised to think we are equal but then you enter the workplace and reality hits you,” says Amanda (38) at the FI rally. After winning 5.5 per cent in May’s European elections, FI hopes to clear the 4 per cent hurdle into the Riksdag parliament with a broad, radical-left programme that promises, among another things, a six-hour working day, improved gay and transsexual rights, a redefinition of economic growth and new laws to make it easier to convict rapists.

“It feels very good that there’s a party that puts equality of all at the top of the agenda,” said Andersson in a campaign video. Speaking to voters in Solna, the energetic Schyman attacks established political pigeon-holing inequality in class, gender, ethnicity or sexuality as separate issues.

Sweden’s mainstream parties make the same mistake, she says, by presenting the far-right Sweden Democrats (SD), poised to take at least 10 per cent of Sunday’s vote, as a single-issue, anti-immigration party.

“It’s not just about racism with them, they are an ideological party working towards the idea of a single, homogenous Sweden,” says Schyman. “This debate has to be taken up in parliament, with us as moderators, otherwise a normalisation of their demands will take place.”

Across town SD party secretary Björn Söder agrees with Schyman when it comes to his party’s ambitions. He has just addressed a handful of people on a pretty Stockholm square, behind a security fence flanked by dozens of police and plain-clothes security officers.

“Immigration is our most important issue but it is interlinked to so much more than that, which makes us so dangerous to the other parties,” says Söder .

Sweden’s “naive” immigration policy has created, at the expense of native Swedes, a low-cost workforce of “uneducated, incompetent” migrants from Romania and Bulgaria, and a spike in asylum seekers from Iraq and Syria.

“Of course we should help but not at the cost of ourselves and our society,” he says, prompting loud jeers from dozens of protesters nearby who show him their backs – and give him the finger.

In the corner of the square, young children are quite literally on the barricades of their schoolyard, shouting “No Nazis on our street” as a saxophonist accompanies them with the Pippi Longstocking theme tune. “They’re pigs and racists, and I find it strange the police are protecting them,” says Amanda, a 26-year-old protester.

Behind the civilised facade of Sunday’s general election, observers see an increasingly fraught cultural battle between polarising extremes on the political left and right.

If the Fi enter parliament and the SD increase support they will hold the balance of power, something the SD in particular is interested in,” says Anders Dalbro, editor at Expo, the anti-racist magazine onced headed by the late Stieg Larsson.

As the two main political camps – centre-right and centre-left – face a photo finish and Sweden another likely minority government after Sunday evening, two political extreme parties may yet be influential kingmakers.