Exiles from the Crimea make a new life in Lviv

When Russia annexed Crimea, many from the Tatar minority fled, fearing oppression 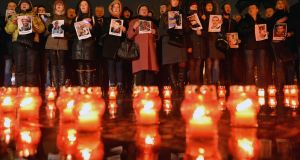 A ceremony in Lviv to remember people who were killed in the city during protests in 2014. Photograph: AFP/Getty Images 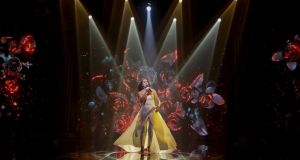 Jamala, a Tatar who’s singing for Ukraine in the Eurovision. Photograph: Reuters/Valentyn Ogirenko 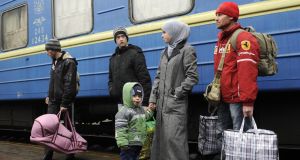 For centuries Lviv was a great city of Poland and the Habsburg Empire. Today it remains a quintessentially central European place, from its ramshackle baroque and Renaissance buildings to its thriving cafe culture.

Geographically and temperamentally, Lviv is now the most “western” city in Ukraine, but this is a big country – the largest entirely in Europe – and two years of violent upheaval have mingled some of its 45 million people in unplanned but transformative ways.

More than 8,000 Ukrainians moved to Lviv to escape a Moscow-backed insurgency 1,200km to the east, most of them Russian speakers who had never been here before but who ignored Kremlin propaganda that painted the city as a poisonous nest of Russian-hating fascists.

The Bakhchisarai cafe, on a cobbled street in the old heart of Lviv, is a good place to meet Ukrainians from a distant and very different region. They come here to enjoy the cardamom-infused coffee and honeyed pastries of home.

About 2,000 Crimean Tatars now live in Lviv, far from the Black Sea peninsula that Moscow annexed in 2014, after protests and deadly clashes forced Ukraine’s venal president Viktor Yanukovych and his clique to flee to Russia.

Two years ago today Crimeans woke to find that camouflage-clad gunmen had taken control of the region’s parliament, airport and other key buildings – a Russian military operation that laid the groundwork for a disputed referendum and Crimea’s incorporation into Russia less than three weeks later, on March 18th.

In the hours before the first appearance of Moscow’s now notorious “little green men” – Russian soldiers without identifying insignia – thousands of Crimean Tatars had rallied outside the region’s parliament in defence of Ukrainian statehood.

“There were always some people who would say ‘Crimea is Russia’, but we never expected it to come to this,” says Edem, a 34-year-old businessman, sipping coffee in the Bakhchisarai, which takes its name from a fabled Crimean city.

“My generation didn’t fully understand what exile meant. Now we know. We feel it just like our forefathers felt it in the Soviet days, and now we feel stronger than ever about our homeland.

“We need to turn this terrible situation – this shock of exile – into the energy to improve ourselves. So that when we return home – and we will return home soon – we will be able to make Crimea flourish.”

Edem was born in the Soviet republic of Tajikistan, bordering Afghanistan and China, into a family that Joseph Stalin had exiled along with the entire Crimean Tatar population in 1944 for alleged collaboration with the Nazis.

About half of the more than 200,000-strong community died from hunger, thirst, disease and cold on their brutal eastward journey in railway cattle cars and during the first year in remote central Asia and Siberia.

Crimean Tatars were allowed to return home only in the late 1980s and often faced hostility from settlers in Crimea, which was a popular retirement destination for Soviet servicemen and their families.

Much of the peninsula’s ethnic Russian majority remained loyal to the Kremlin, and in a 1991 referendum Crimea was the region that showed by far the least enthusiasm for Ukrainian independence.

After breaking from Moscow’s crumbling empire a Ukraine dogged by poverty and corruption did little to strengthen a sense of Ukrainian patriotism or identity in Crimea, and nostalgia for the Soviet era and Kremlin rule took deep root.

In the winter of 2013-14, as rallies in Kiev and other cities clamoured for Ukraine to escape Russian domination and pivot to the west, Moscow’s state media convinced many Crimeans that they were in mortal danger from far-right elements in the protest movement.

When the chance came to vote in a controversial referendum on March 16th – arranged in a matter of days and overseen by Russian gunmen – most of Crimea’s 65 per cent Russian majority jumped at the chance to join Russia.

Although Ukrainians and almost all Crimean Tatars seemed to oppose annexation, Russia made the unbelievable claim that more than 96 per cent of people had voted in favour of Kremlin rule, on a turnout of 83 per cent.

The Russian president, Vladimir Putin, hailed the glorious “return” of Crimea, which had been transferred within the Soviet Union from Russia to Ukraine in 1954. The Crimean Tatar leader Refat Chubarov lamented his nation’s “tragedy”.

Two years later Russia has banned Chubarov and other Crimean Tatar leaders and activists from their homeland, and more than 20,000 people have left the peninsula, the majority of them Crimean Tatars and Ukrainians.

“One day I woke up in another country – one to which my people have a deep historical antipathy,” says Enver Bekirov, a 40-year-old who left Crimea for Lviv shortly after annexation. “For over 300 years we have known that our northern neighbour brings oppression. When I saw its flag flying on our official buildings, I knew it would bring nothing good and that our people would start dying and disappearing.”

A gang of men beat Bekirov when he refused to show his identification papers to a member of Crimea’s so-called self-defence militia two years ago.

“They gave alcoholics, drug addicts and criminals uniforms and guns and put them in charge of Crimea. Now you are not allowed to speak your mind, and speaking the Crimean Tatar language can bring threats: ‘Speak Russian!’ people say.”

Bekirov had taken part in the pro-western protests in Kiev that had ousted Yanukovych, and photographs of him there were posted online.

“If I had trouble in Crimea I knew no police or ambulance would come to help me. I realised I could die the next day and no one would help my family. So we came to Lviv – me, my wife and children, two bags and a pushchair.”

A Lviv family hosted them for a year, sharing their flat, lending them money “and teaching us all about western Ukraine, its traditions, culture, music, food. About how much they love Ukraine,” Bekirov says.

“And I taught them about Crimean Tatar life and culture. They made us all so welcome, and now my wife, who was born in Russia, is a fierce Ukrainian patriot.”

This is despite evidence that pro-Russian paramilitaries from the “Crimean self-defence force” are responsible for at least some of these crimes, Amnesty says.

Freedom of expression, assembly and association has been curtailed, and those expressing pro-Ukrainian sympathies face harsh reprisals, according to a report that Amnesty published this week.

This month masked Russian police raided the homes of at least 12 Crimean Tatars and arrested several on suspicion of belonging to a banned Islamist group.

Russia’s chief prosecutor in the region also wants to ban the Crimean Tatar executive council, called the Mejlis, for being an “extremist organisation”.

Russian authorities have shut down the main Crimean Tatar television and radio broadcaster; like the community’s most respected activists, it now operates from “mainland” Ukraine.

While activists campaign politically for Crimea’s return to Ukraine, others have taken more radical action. Last November electricity lines were blown up in southern Ukraine, plunging much of Crimea into darkness – a Crimean Tatar flag, which shares Ukraine’s blue and yellow colours, was tied to a mangled pylon; activists also stopped trucks entering Crimea, and Kiev later banned all trade with the region.

Western sanctions and plunging oil prices have given Russia its own financial headaches, however, and many Crimean Tatars are surprisingly optimistic that Putin’s regime will soon fall, their homeland will return to Ukraine and they will go home.

“Before, Ukrainians didn’t really know what to make of us – these Muslims with their own Turkic language, living down there in Crimea,” says Edem.

“Now Ukraine knows we are patriots who refuse to bow to Russia. What has happened has made us a deeper part of Ukraine – and the world knows that too.”

That message is likely to reach more than 100 million people in May, when the Crimean Tatar singer Jamala will sing for Ukraine in the Eurovision Song Contest, in Sweden.

Jamala says that her song, 1944, is inspired by deportation, as her great-grandmother saw one of her daughters die in the freight wagons taking them east, and her body was thrown from the wagon “like garbage”. “When strangers are coming,” the song begins, “they come to your house. They kill you all and say: ‘We’re not guilty, not guilty.’ ”

Russian deputies say that 1944 breaches the Eurovision ban on political performances; although the song makes no mention of the 2014 annexation Jamala acknowledges its resonance with her people’s current plight.

“Now the Crimean Tatars are on occupied territory, and it is very hard for them,” she says. “They are under tremendous pressure. Some have disappeared without a trace. And that is terrifying. I would not want to see history repeat itself.”

One year on: Coming from Wuhan is now a source of pride but many remain wary 10:30
Police ‘start detaining Navalny supporters’ ahead of Moscow rally 10:17
Covid-19: Hong Kong locks down thousands for compulsory testing 07:56
Trump impeachment trial set to loom over Biden’s first weeks in office 00:33
UK Covid-19 variant may be 30% more deadly, Boris Johnson says 20:16