The average age is 48 and women represent 33 per cent of the Commission, the same representation as under Mr Junkers’ predecessor, José Manuel Barroso. 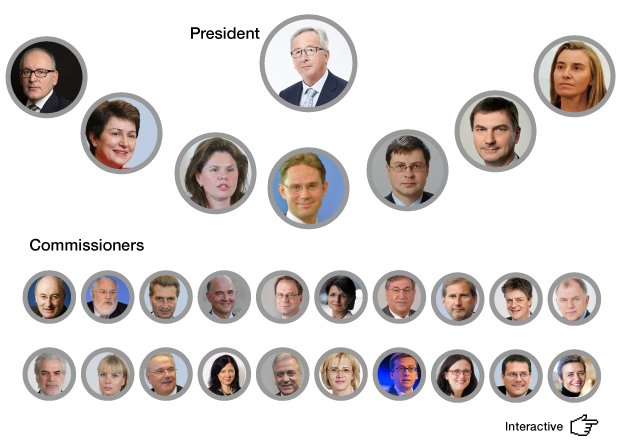 The following is the roster of the new European Commission:

Croatia: Neven Mimica (60) outgoing centre-left consumer protection commissioner. A career politician and diplomat, he oversaw Croatia's talks with the World Trade Organization in the late 1990s, and the start of Zagreb's membership negotiations with the European Union in 2000-01. * Commissioner for International Cooperation and Development.

Denmark: Liberal Economy Minister, Margrethe Vestager (46). A career politician and leader of the Social Liberals since 2007. * Commissioner for Competition.

Netherlands: Outgoing Foreign Minister Frans Timmermans (53) a career diplomat from the centre-left Labour Party. * Commission's first Vice-President in charge of Better Regulation, Inter-Institutional Relations, the Rule of Law and the Charter of Fundamental Rights. Juncker said Timmermans would be his "right hand".

Portugal: Secretary of State Carlos Moedas (44) from centre-right Social Democratic party. Founded own investment company in 2008 and was a banker at Goldman Sachs. * Commissioner for Research, Science and Innovation.

Slovakia: Maros Sefcovic, current vice-president in charge of cooperation among EU institutions and a career diplomat. * Commissioner for Transport and Space.

Roofers fraudulently obtained over €44,000 from elderly woman, court told
‘I had been addicted for eight years and didn’t realise the depth of it until one day I couldn’t stop shaking’
Anti-immigration protesters march through Mullingar over barracks plan
Anti-immigration activist Graham Carey charged with incitement to hatred, barred from social media
Vacant Victorian flats refurbished for social housing after 18 years of dereliction

Denis Walsh: The League does not matter like it used to, but hurling is still hurling

‘Someday they will find him’: Ukrainian refugee buried in west Cork after failed search for family

Profits at Michael Guiney increase by a fifth