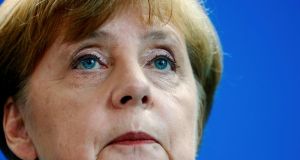 Chancellor Angela Merkel has said she accepts – “with great regret” – Britain’s decision to leave the EU but insisted the union would recover from this “serious setback” to the European integration project.

The German leader vowed to help shape a “close, co-operative” relationship with Britain outside the EU and called on remaining leaders to act together after a “calm and confident” analysis of the challenges ahead.

Ahead of next week’s EU summit in Brussels, the German leader will meet French and Italian leaders in Berlin on Monday, joined by European Council president Donald Tusk.

On Saturday morning, Germany will host a meeting of “founding EU” foreign ministers in Berlin as the continent’s ascendent Eurosceptics expressed hope for further referendums to follow Brexit: Dexit (Denmark), Nexit (The Netherlands) or even Öxit (Austria).

German foreign minister Frank-Walter Steinmeier will welcome his colleagues from France, Italy, Belgium, Luxembourg and the Netherlands outside Berlin after what he called a “really sobering” Brexit vote.

“It looks like a sad day for Europe and Britain,” said Mr Steinmeier.

Around the German capital, shell-shocked senior politicians admitted they were “grieving” the looming departure of an often aggravating but always admired EU partner.

The Brexit decision presents Chancellor Angela Merkel, Europe’s dominant leader, with the greatest headache of her career. At home, she must work fast to limit economic disruption possible by the EU departure of Germany’s third-largest export market. And, just over a year before federal elections, she needs a quick deal with Britain to take the wind from the sails of Germany’s nascent right-wing populists.

Dr Merkel’s closest EU advisers cancelled a planned press briefing on Friday to mull over another dilemma: how to jump-start EU reform without Britain, one of its great reform powers, without Berlin appearing even more dominant than it already is.

“The EU procedure for an exit from the EU is regulated clearly and will be used. This creates reliability,” said Dr Schäuble. “Europe will stand together. Together we have to make the best of the decision of our British friends.”

Dr Merkel’s EU-critical Bavarian ally Horst Seehofer wasted no time in calling for Germany to hold its own EU referendum, saying “civic participation is the core of modern politics”.

Around Europe, reactions to the Brexit vote ran the gamut from shock and disappointment to firm resolve not to grant Britain too many concessions in upcoming negotiations – for fear of encouraging copycats. That tone was hardest in countries where Eurosceptic, populist parties are dominant forces in the political landscape.

In Vienna, Austrian chancellor Christian Kern warned that an EU without Britain “would lose status” in the world and insisted Austria would not hold a referendum on EU membership. His foreign minister, Sebastian Kurz, said that the departure of an EU major member state meant that “nothing remains the same”.

“We cannot rule out a domino effect,” he said.

“This result is a turning point for democracy, against the political centralism and the ongoing migration madness,” said FPÖ leader Heinz-Christian Strache, demanding a serious reform push by the EU or face a new exit push from his party, Austria’s strongest.

Its German ally, the Alternative für Deutschland (AfD), hailed a “historic day” for Britain and for Europe.

“The people have spoken, this is direct democracy,” said Beatrix von Storch, AfD deputy leader and an MEP in Brussels.

“Now it’s our turn, the Dutch people have to have the chance to speak their mind,” he said, hitting the Hague’s Achilles heel, two months after voters rejected an EU trade deal with Ukraine.

Britain’s departure could cause untold aftershocks among its traditionally close northern European allies. Opinion polls in Denmark and Sweden show solid majorities in favour of EU membership but mainstream political leaders there, facing strident anti-EU populist parties in their parliaments, came out quickly on Friday to reaffirm their belief in the bloc.

Denmark, which joined the then EEC in 1973 alongside Britain and Ireland, said it was a “sad” vote but would not trigger a Danish EU referendum.

“The EU is Denmark’s best opportunity to influence the world that we are a part of, for better or worse,” said Lars Løkke Rasmussen, prime minister of Denmark, where two-thirds of people still support EU membership.

In Sweden, EU affairs minister insisted the country would “continue to work for a prosperous Europe”.

Though 72 per cent of Swedes favouring continued membership, the far-right Sweden Democrats are anxious to capitalise on the British vote to boost their own “Swexit” demands.

Across in Helsinki, Finland’s foreign minister Timo Soini, head of the Eurosceptic Finns party, said the British vote must be respected and warned against EU “retaliation” in upcoming talks on a new deal.

In Brussels, however, European Parliament president Martin Schulz was less conciliatory, saying a drawn-out divorce with Britain was not in the EU’s interest. “The EU was the biggest single market in the world,” he said, “and Great Britain has just cut its ties to it.”

Czech prime minister Bohuslav Sobotka agreed that the British vote did not mean the end of the EU but that the bloc should agree Britain’s departure “quickly and rationally”.

“The European Union must change quickly,” wrote Mr Sobotka on his Facebook page. “Not because Britain has left, but because the European project needs much stronger support of its citizens.”

“This is the lesson for us: Brussels must hear the voice of the people,” he said on Hungarian radio.

Polish foreign minister Witold Waszczykowski agreed that the result was bad news for Europe and “a great dilemma for eurocrats”.

“We all want to keep the EU, the question is in what shape,” he said on Polish television. “This happened because the [EU] concept, which was created some time ago, is no longer popular in Europe.”

Central European countries faced a rapid sell-off in their currencies on Friday with Poland’s zloty, seen as a proxy for emerging-market risk, sliding to a five-year low.