European Parliament calls on UK to withdraw from EU quickly 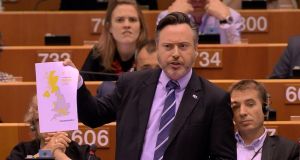 The European Parliament has voted for a resolution asking the UK to withdraw from the EU as soon as possible.

However, Fine Gael MEPs abstained on the vote as they did not back the immediate triggering of a UK exit.

The party’s Dublin MEP Brian Hayes said that while his party was broadly in favour of the resolution passed by the Parliament it did not favour precipitate action. “It is not in the Irish national interest to trigger an immediate UK exit,” said Mr Hayes.

“We need to take our time and see what is the best way out of this mess for Ireland and the rest of the EU,” he said.

The Parliament backed a resolution proposed by the major political groupings which called on the UK to respect the wish of a majority of EUs citizens, “entirely, fully and as soon as possible, by officially withdrawing from the EU before any new relationship arrangements can be made”.

The decision was taken by the Parliament after an extraordinary plenary debate during which MEPs also stressed the urgent need for reforms to ensure that the EU lives up to its citizens’ expectations.

After a debate between Parliament’s political group leaders, EU Commission President Jean-Claude Juncker and Dutch minister Jeanine Hennis-Plasschaert, representing the EU Council’s rotating presidency, Parliament voted a resolution on ways forward after the UK referendum on June 23rd. The text was approved by 395 to 200, with 71 abstentions.

The resolution called on the UK government to respect its people’s democratic decision via a swift and coherent implementation of the withdrawal procedure, i.e. by activating Article 50 of the Treaty on European Union so as to allow withdrawal negotiations to start as soon as possible.

“To prevent damaging uncertainty for everyone and to protect the Union’s integrity, the UK Prime Minister should notify the outcome of the referendum to the European Council of 28-29 June in order to as soon as possible launch the withdrawal procedure (5) and negotiations, urge MEPs.,” it said.

MEPs recall that the European Parliament’s consent for the withdrawal agreement and any future relationship (8) is required under the Treaties, and that it must be fully involved at all stages of the various procedures.

The Parliament also called on the European Council to change the order of its presidencies to prevent the withdrawal process from jeopardising the management of the day-to-day business of the Union. The UK was set to take on the presidency in the second half of 2017. (15) Parliament will also change its internal organisation to reflect UK citizens’ will to withdraw from the EU (13).

The current challenges demand reform to make the Union “better and more democratic”, and to “deliver what citizens expect”, MEPs insist. “While some Member States may choose to integrate more slowly or to a lesser extent, the core of the EU must be reinforced and à la carte solutions should be avoided” , says the text of the resolution.

Irish MEP Sean Kelly said the focus by some EU member states on Britain to “start the clock” on Brexit is misguided.

Speaking in advance of the EU summit in Brussels, he said it is in Ireland’s interests to give Britain time to reconfigure its relationship with its European trading partners.

The Fine Gael MEP and leader of the Irish EPP group in the European Parliament has proposed the remaining 27 member-states should take the initiative and identify the date when Britain must either conclude negotiations or leave. He said Britain needs to “get its house in order”.