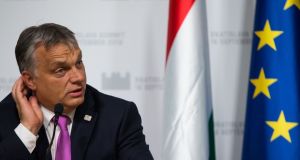 Situated majestically on the banks of the river Danube, Budapest is a city drenched in history.

While the reconstructed domes and bridges hark back to its status as the second city of the Austro-Hungarian empire, Budapest’s streets are haunted by its more recent 20th-century past.

As the home of Europe’s largest synagogue, reminders of the city’s Jewish heritage are everywhere. Hungarian Jews were one of the last to perish in the Holocaust, with hundreds of thousands of Jews rounded up and transported mainly to Auschwitz in 1944 and 1945 in a final push by the Nazis.

Elsewhere in the city preparations are under way for next month’s 60th anniversary of the 1956 Hungarian uprising, when the Soviets brutally suppressed a revolt, paving the way for 30 further years of communist rule.

As people soak up the last rays of the late summer sun in the cafes and wine bars near the trendy former Jewish area, reminders of another historic event abound. A referendum on the EU’s migration relocation plan is scheduled for October 2nd. Campaign posters are dotted across the city. “Vote No! Do not risk Hungary’s future!” screams one, pasted over a background of a Hungarian flag.

The referendum has become the latest symbol of Hungary’s hard-line stance on the refugee crisis and the increasingly Eurosceptic tone of its government. Prime minister Viktor Orban announced the plans for a plebiscite in February, accusing the European Union of “pushing a new EU asylum and migrant system down the throats of the central European countries”.

It followed a furious reaction from Hungary and other central and east European member states over the European Commission’s German-backed mandatory quota systems for refugees.

Hungary has also joined Slovakia in bringing a court challenge to the measure to the European Court of Justice.

The government has spent €16 million sending booklets to Hungarian homes with anti-migrant messages, including warnings about no-go areas across Europe which they say have been overrun by migrants.

Other posters play on rhetorical questions such as “Did you know that the Paris terror attacks were carried out by immigrants?” and “Do you know that nearly one million immigrants want to come to Europe from Libya alone?”

The referendum, even if passed, will have little legal weight. The quota plan is now technically EU law, though it is being challenged in the courts and implementation of the scheme has been painfully slow. But as with many referendums, it is the messaging rather than the substance that matters. The phrasing of the referendum question casts the referendum as a vote on whether the EU should be permitted to impose laws over the will of a national parliament. “Do you want the European Union to be able to mandate the obligatory resettlement of non-Hungarian citizens into Hungary even without the approval of the National Assembly?” it states.

The casting of the question is likely to ensure that the referendum passes, while also chiming with recent calls from Orban and other former communist member states for the European Commission to rein in its powers over member states.

Critics point out that the referendum is a cynical move by Orban to consolidate power. By keeping migration on the agenda, it allows Orban’s ruling Fidesz party to ignore other, more pressing issues, such as healthcare.

The government succeeded in keeping the controversial question of Sunday opening hours off the ballot. Taking an apparently tough stance on immigration also helps to fend off the political threat of ultra-right party Jobbik.

Despite the notable absence of Syrian refugees in the country – Hungary remains overwhelmingly white and monocultural – polls suggest that a No vote will prevail on October 2nd, though it is unclear if the government will secure the 50 per cent turnout needed to validate the poll.

Whatever about the referendum’s legal standing, stirring up fears about immigration is likely to remain a key plank of Orban’s political messaging. As he told parliament in a chilling image this week: “We are losing our European values and identity the way frogs are cooked in slowly heating water. Quite simply, slowly there will be more and more Muslims and we will no longer recognise Europe.”