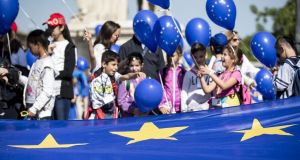 A ceremony on Europe Day in Rome on Monday. The day is aimed at celebrating peace and unity on the continent. Photograph: EPA/Massimo Percossi

On Monday, staff at the European institutions in Brussels took to the summer sunshine as European Union buildings closed their doors for Europe Day.

May 9th marked the anniversary of a speech in 1950 by Robert Schuman, architect of the European project, in which he set out the case for a European coal and steel community, the forerunner of the EU.

On the same day a manifesto for change, The Appeal of 9 May: A Roadmap for a New European Renaissance, gathered momentum on social media. The short proclamation called for Europe to “reconnect with disoriented and unsatisfied citizens” warning that Europe would otherwise “fade away”.

With the UK referendum on EU membership just six weeks away, the question of what the EU means and how it can define itself in the modern world has never seemed so relevant.

The prospect of a British exit has spawned an existential crisis for the EU, amid fears that people are increasingly turning away from the European idea.

The future of Europe was the subject of a debate last week in Rome between the heads of the three main EU institutions on the eve of the awarding of the Charlemagne Prize to Pope Francis.

Speaking in the grand surroundings of the Capitoline Museum in the room where the Treaty of Rome was signed in 1957, European Commission president Jean-Claude Juncker, European Parliament president Martin Schulz and European Council president Donald Tusk debated the state of the union.

A central theme of the discussion was the relationship between the EU and its member states.

Reflecting on his time in European politics, EU veteran and arch-federalist Juncker said commitment to a common European purpose had faded.

“In former times we were working together. I remember the highly exciting period when we went together step by step, moving direction.”

Recalling that the proposed EU constitution that was later rejected by French and Dutch voters had been signed in the same room, he said he regretted that the constitution had not been endorsed.

Tusk presented an alternative view.If Juncker and Schulz are the epitome of the kind of European federalism against which Eurosceptics rally, the former Polish prime minister, the first east European to hold a senior EU institutional position and the man charged with getting agreement between 28 EU prime ministers at European Councils, is more attuned to the primacy of the nation state.

In fact, he said the EU needed to embrace the different needs and demands of its constituent member states.

“Today we have to admit that the dream of one EU state, one vision about the past and the future, one European nation, was an illusion,” said Tusk.

“It is a family built on very fragile and conflicting group of states, nations, behaviours and traditions. The worst thing is to pretend that we are not aware of this fact.”

The discussion highlighted what has always been a key dilemma for the European project and one being brought to the forefront by the British referendum: is the EU’s inevitable trajectory an emergent federal state or will internal tensions eventually precipitate its breakup?

Although a British exit would set a dangerous precedent for the break-up of the European project, it may also lead to a renewed impetus for integration among the remaining member states.

In February the six foreign ministers of the EU’s founding members met in Rome to discuss the future of Europe. They underlined their commitment to “ever-closer union”, a theme that will feature at a conference of the presidents of national parliaments in Luxembourg later this month.

Even if Britain votes to remain, its opt-out from the principle of ever-closer union secured by prime minister David Cameron in his renegotiated deal in February means a two-speed Europe is inevitable, most likely centred around greater euro-zone integration.

Where Ireland positions itself in the next phase of the EU’s journey as the bloc prepares for the 60th anniversary of the Treaty of Rome next year will be a key question in the coming years.