EU’s Google ruling cranks up tension with big US firms

Europe Letter: Many in US see Google case as part of clampdown on US multinationals 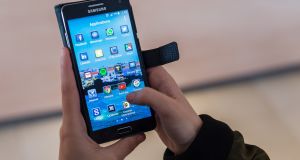 The commission accuses Google of abusing its market dominance by preinstalling apps on the Android devices it sells in Europe, while also preloading Google Search as the default search engine in some cases. Photograph: Geert Vanden Wijngaert/AP

Wednesday’s decision by the European Commission to charge Google with abusing the dominance of its Android operating system marks the latest attempt by EU regulators to clamp down on multinationals.

In a world in which the EU is often accused of being too wrapped up in empty bureaucracy, the commission’s competition arm is one area where the EU has real teeth.

As companies such as Ryanair know too well in the wake of three failed attempts to buy Aer Lingus, the competition division is immensely powerful. Its binding anti-trust decisions can make or break multimillion euro mergers if it perceives that the interests of companies or EU consumers are being undermined by unfair market practices.

It is the power of EU competition law that so worries authorities in Dublin as the Government awaits the outcome of the EU investigation into Apple’s tax dealings with Ireland: by treating the US company’s dealings with the Irish tax authorities as a state aid matter rather than a taxation issue per se, the EU is deploying one of its most powerful tools.

Wednesday’s announcement by competition commissioner Margrethe Vestager follows a year-long investigation. In its statement of objections sent to Google, the commission accuses it of abusing its market dominance by preinstalling apps on the Android devices it sells in Europe, while also preloading Google Search as the default search engine in some cases. This prohibits other companies, particularly those designing apps, to access the market, the commission argues, while also giving less choice to consumers.

The Danish commissioner put it succinctly in a speech on Monday: “By requiring phone makers and operators to preload a set of Google apps, rather than letting them decide for themselves which apps to load, Google might have cut off one of the main ways that new apps can reach customers.”

This week’s charge is the second competition case launched by the commission against Google in recent years. Its investigation into whether the company is favouring its own shopping services through the dominance of its search engine is still continuing.

The EU’s actions against Google are far from its only incursion into the realm of US tech multinationals. It’s more than a decade since the commission took a landmark competition case against Microsoft, accusing it of abusing its dominance of PC operating systems by forcing consumers to use Window Media Player.

The case led to more than €2 billion in fines for Microsoft and was seen as an early indication the EU was ready to take on competition issues presented by the rapidly-changing technology sphere. Just as the EU was ready to protect consumers and small companies from the dominance of companies in other sectors, so too was it ready to stand up to digital monopolies.

President Barack Obama has openly accused the EU of protectionism in its treatment of US tech companies.

Bound up with this are recent tensions between the EU and US on data protection. The striking-down by the European Court of Justice of the “Safe Harbour” agreement that governs transatlantic data transfers was a major victory for EU privacy campaigners.

For Ireland, none of this is good news, as the European headquarters for many US tech multinationals Ireland are treading a fine line between maintaining allegiance to US companies and acknowledging the data privacy and tax justice concerns of EU members.

As long as US companies continue to dominate the technology world, it is a balancing act that is likely to continue in the years to come.