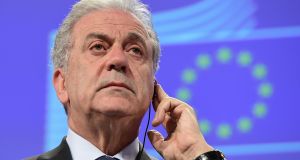 European Commissioner for Migration Dimitris Avramopoulos listens to questions as he addresses a press conference on the EU’s reaction to the migrant crisis ahead of an EU leaders summit with Turkey. Photograph: Emmanuel Dunad/AFP/Getty Images. 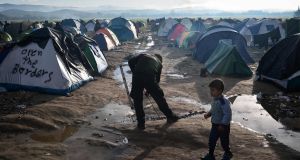 A man tries to drain the water at a makeshift camp after night’s rainfall near the Greek village of Idomeni at the Greek-Macedonian border. The European Commission has given EU member states until the end of the year to phase out all border checks introduced in the wake of the refugee crisis. Photograph: Louisa Gouliamaki/AFP/Getty Images.

The European Commission has given EU member states until the end of the year to phase out all border checks introduced in the wake of the refugee crisis.

In an effort to save the Schengen free-travel area, EU migration commissioner Dimitris Avramopoulos urged member states to “pull together in the common interests to safeguard one of the Union’s crowning achievements.”

“Schengen and our Union is at stake,” he said as he announced a new package of measures in Brussels on Friday.

The Greek commissioner called on member states to move from “unilateral decisions on reintroducing border controls towards a coordinated approach.”

Under the new “roadmap” for Schengen, internal border controls should be lifted by December 2016 to ensure that Schengen returns to a fully-functional state. The Commission has also called on member states and the European Parliament to progress the controversial EU border and coast guard announced last year by June. The new force, which would involve the pooling of coast guard services between member states, should be operational by September and fully functional by November at the latest.

The EU’s border-free travel zone - which came into effect in 1995 - has been thrown into disarray in recent months as countries have re-introduced border controls unilaterally in the face of Europe’s biggest refugee crisis since the Second World War.

Eight EU countries - including Germany, Denmark, Austria and Belgium - have re-introduced checks at certain border crossings in response to the crisis.

Mr Avramopoulos said that, while the temporary reintroduction of border checks was permitted under Schengen rules, “they are indeed exceptional and temporary”, as he urged countries to return to a border-free Schengen zone as soon as possible.

He also stressed the importance of strengthening the EU’s external borders by ensuring that all people entering the EU are identified and registered correctly. “We cannot have free movement internally if we cannot manage our external borders effectively”, he said.

According to EU estimates the economic costs of reintroducing temporary border controls range from €5 billion to €18 billion annually. Member states such as Poland, the Netherlands and Germany could face more than €500 million of additional costs in terms of road transport of goods, while at least €1.1 billion of administrative costs would be generated due to the need for more staff at border controls.

The Commission’s intervention comes ahead of a key EU-Turkey summit on Monday in Brussels at which EU leaders will seek to finalise a deal with Turkey to stem the flow of migrants arriving to the European Union. With more than 20,000 people now stranded in northern Greece at the border with Macedonia, the United Nations has warned that Europe may be facing an imminent humanitarian disaster in the region.

European Council president Donald Tusk is due to meet with Turkish president Recep Tayyip Erdogan on Friday for talks. A key objective from the EU’s perspective is that Turkey agrees to readmit economic migrants from Greece, particularly those from countries like Afghanistan and Morocco, who are not eligible for asylum.

Speaking following talks with Greek prime minister Alexis Tsipras in Athens on Thursday, Mr Tusk warned economic migrants not to travel to the European Union. “Do not come to Europe,” he said. “Do not believe the smugglers. Do not risk your lives and your money. It is all for nothing.”

Figures from the International Organisation for Migration show that more than 120,000 migrants have arrived in Greece from Turkey this year, and 321 have died. On Wednesday the European Commission announced a three year €700 million humanitarian aid package to help countries dealing with the refugee crisis.