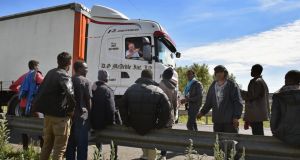 A lorry driver in Calais, France gestures at migrants as they try to board lorries bound for the UK on June 25th, 2015. Photograph: Jeff J Mitchell/Getty Images

EU leaders postponed a detailed discussion on how to redistribute migrants across the EU until next month amid continuing opposition among member states to a mandatory relocation programme for migrants.

Despite the deepening crisis over Greece, migration featured high on the agenda on the first day of the EU leaders’ summit in Brussels, with leaders pledging to consider the European Commission’s proposal to relocate 40,000 migrants arriving in Italy and Greece across the EU. But they stopped short of backing a mandatory proposal.

Despite outrage at the surge in deaths in the Mediterranean this year as migrants try to flee North Africa for Europe, the EU has struggled to forge a collective response to the migration crisis.

Member states are wary of a European Commission proposal to relocate migrants, which would potentially tamper with the so-called Dublin regulation, which states migrants arriving in Europe must seek asylum in the member state where they first arrive.

In a reflection of the hardening stance of member states towards a relocation programme for migrants, European Council president Donald Tusk said on Thursday that the “priority” of the European Union should be to contain illegal migration.

“Today, I expect the European Council to send a strong message that all those who are not legitimate asylum seekers will have no guarantee that they will stay in Europe . . . only with this message can we make real progress on relocation from Italy and Greece.”

Proposals under consideration by leaders last night were said to be placing a strong emphasis on the return and repatriation of illegal migrants to the country of origin, with the EU prepared to give increased financial and logistical assistance to third countries to enhance readmission.

Aurelie Ponthieu of Médecins sans Frontières said the migration crisis in the Mediterranean was “not due to unmanageable numbers of migrants and refugees” but was “a direct result of chronic shortcomings in the EU’s policies in handling the new arrivals”.