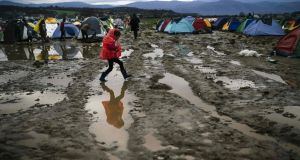 A girl walks in the mud in a makeshift camp at the Greek-Macedonian border, near the Greek village of Idomeni, where thousands of refugees and migrants are stranded by the Balkan border blockade. Photograph: Dimitar Dilkoff/AFP/Getty Images

EU justice ministers meeting in Brussels have questioned Turkey’s ability to qualify for visa liberalisation by June, in a sign of significant opposition to a key element of a provisional EU-Turkey deal agreed on Monday.

With EU leaders due to reconsider the proposal at next Thursday and Friday’s summit, a number of justice ministers expressed reservations about the deal, which aims to tackle the refugee crisis.

“It is highly questionable that Turkey, which puts a newspaper critical of the government under its own control, presents a wish-list three days later and is rewarded by discussions about earlier visa liberalisation,” said Austria’s interior minister Johanna Mikl-Leitner. “I ask myself if the EU is throwing its values overboard.”

Dutch minister for migration Klaas Dijkhoff, whose country holds the six-month rotating EU presidency, said the proposed “one-for-one” resettlement scheme with Turkey – whereby one refugee would be resettled for every one sent back to Turkey – would be temporary, because the number of migrants arriving would decrease as the result of the plan.

He added that a more permanent resettlement arrangement would have to be agreed. His comments came as Turkey’s minister of European Union affairs, Volkan Bozkir, said that his country would take back “tens of thousands” of migrants from Greece under the plan, rather than millions, adding that the proposal would only apply to new migrants arriving in Greece.

As a number of western Balkan countries continued to shut their borders to migrants, Greek migration minister Yiannis Mouzalas called for the EU to provide solutions “in a united way, without unilateral actions”, adding that there was “no reason to thank the member states that violated the EU decisions by proceeding to unilateral actions”.

His comments were widely perceived as a reference to comments by European Council president Donald Tusk, who thanked western Balkan countries for implementing part of the EU’s migration strategy in a tweet on Wednesday.

In contrast, the decision by a string of countries along the western Balkan route to effectively close their borders this week provoked strong criticism from Greece and Germany. Slovenia, a member of the European Union, said it would only allow entry to those wishing to claim asylum there or to migrants who are seeking entry “on humanitarian grounds and in accordance with the rules of the Schengen zone”.

German chancellor Angela Merkel, who opposed the inclusion of a reference to the closure of the western Balkan routes in Monday’s EU-Turkey summit conclusions, renewed her criticism of unilateral border closures by member states.

“This unilateral decision by Austria and subsequently by the Balkan countries on one hand brings us fewer refugees, but on the other hand puts Greece in a very difficult situation. And this situation is not durable and sustainable,” she said on Thursday. “The problem is not solved by one [country] making a decision. It must be a decision that is right for all 28.”

Aid agencies reported that more than 400 people were now trapped in a no-man’s land between Macedonia and Serbia, while more than 14,000 people continue to live in makeshift accommodation at Idomeni on the Greek-Macedonian border.

EU justice ministers on Thursday vowed to prioritise the establishment of the European border and coast guard announced by the European Commission last December by June this year.

As MEPs debated the latest EU response to the refugee crisis at their plenary session in Strasbourg, Irish MEP Deirdre Clune was among those who called for the immediate implementation of the EU-wide coast guard force. She said the new force would ensure “a strong and shared management of the EUs external borders”.

She also called for Ireland to play a full role in the new coast guard, despite not being member of Frontex, the existing EU border agency.