EU has Poland in its sights over attempted judicial reform 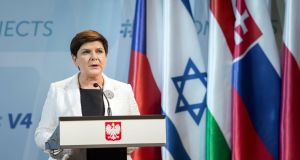 Poland has been given a month to address the “grave concerns” of fellow EU member states over its controversial judicial reform.

Although Polish president Andrzej Duda has vetoed two out of four Bills of immediate concern, the European Commission on Wednesday formally gave notice of further action against Poland by the EU with a “Rule of Law Recommendation” that may trigger a collective warning by member states under article 7 of the European treaty.

The procedure, which has never yet been used by heads of government, allows for the eventual suspension of a state’s voting rights for “serious and persistent breaches” of fundamental EU values. That has to be agreed by unanimity, although the formal warning can be agreed by four-fifths of member states. This may well happen in September.

Commission vice-president Frans Timmermans, who has led Brussels’ efforts to broker a formal dialogue with Warsaw, also warned that should Poland’s ruling Law and Justice Party try to sack any of the country’s supreme court judges, the EU was “immediately ready to trigger the article 7 procedure”.

He attacked Poland for undermining the rule of law, specifically the independence of the judiciary, fundamental EU values reflected in article 2 of the Treaty of European Union.

Separately the commission agreed to initiate infringement proceedings against Poland in the European Court of Justice over breaches of EU law by the Bill that Mr Duda did not veto, the Law on the Ordinary Courts, as soon as it is officially published.

The law gives the government the power to dismiss or prolong the mandate of judges in the lower courts and has also caused concern in Brussels over different retirement ages for male and female judges (in breach of EU equality legislation).

The Rule of Law Recommendation follows two previous recommendations in 2016 on attempts by Poland to “reform” the judiciary and to which the Polish authorities have so far failed to respond.

Speaking on Tuesday, Poland’s prime minister, Beata Szydlo, said her government was open to discussions, but insisted on its determination to press on with its reform of the courts. “We cannot yield to the pressure of the street and from abroad,” she said, referring to days of protests in Warsaw and other Polish cities.

The commission, at its last meeting before the August break, also stepped up legal action against Poland, Hungary and the Czech Republic over their failure to comply with legal obligations to share in the relocation of migrants and refugees currently stranded in Italy and Greece.

The commission issued a “reasoned opinion” against all three, the second stage of infringement proceedings arising from the “burden-sharing” decision on dealing with the migration crisis by member states in September 2015.

To date, the commission was told , some 24,676 refugees have been relocated under the scheme. The largest groups have been taken in by Germany, Sweden and the Netherlands (6,927, 974, and 2,152 respectively). Ireland has taken in 459, from Greece alone, because of difficulties with the Italian authorities.

The disputes with Poland and other “new Europe” states reflect concerns within the EU at a fraying at the edges of the idea of a political “union of values” based on shared commitments to the rule of law, human rights and to solidarity between states.

Upholding such basic standards has become an increasingly important political imperative for the commission, although it has limited and clumsy legal tools at its disposal, and not least because it is determined to see the union rebranded as more than a giant marketplace, but as a citizens’ Europe.

It may seek other means of arm-twisting recalcitrant member states, and in the discussions on the next five-year budget, there is talk, according to budget commissioner Günther Oettinger, of applying “conditionality” to spending programmes, in other words linking spending to compliance with basic EU rule of law standards, or shared commitment to “solidarity” or helping each other out.

Mr Oettinger told a group of journalists on Tuesday night there was strong support among “net budget contributors” for such conditionality.

And human rights concerns were centre-stage in the EU-Turkey talks on Tuesday with EU negotiators making it clear that relations could not improve unless Ankara did more about ending its current erosion of the rule of law, human rights and media freedom.