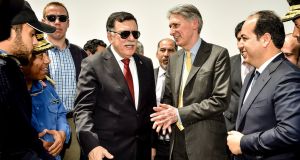 EU foreign ministers meeting in Luxembourg on Monday considered expanding the EU’s naval mission in the Mediterranean into Libyan waters amid concerns that the number of refugees attempting to cross to Europe from Libya could increase.

The meeting took place amid unconfirmed reports that hundreds of people fleeing Somalia drowned after a boat carrying migrants capsized in the Mediterranean. While Italy’s president said that hundred of migrants may have died in an incident, this was not confirmed by Egyptian authorities or the Italian coast guard.

As foreign ministers gathered in Luxembourg for a scheduled meeting, Spain and France were among those countries who urged the EU to extend the mandate of its naval mission into Libyan waters – a tricky legal proposition – if requested to do so by the new government in Tripoli.

France was one of a number of countries to call for the mandate of the EU’s “Operation Sophia” to be extended. The naval mission, which was launched last year, has so far saved thousands of lives, but only operates in international waters, which prevents the mission from taking smugglers’ vessels. Countries, including Ireland, want UN backing before extending the reach of the operation into Libyan waters.

Following the surprise visit by French foreign minister Jean-Marc Ayrault and his German counterpart Frank-Walter Steinmeier to Tripoli at the weekend, British foreign secretary Philip Hammond became the latest high-profile European figure to indicate his country’s backing for the new Government of National Accord (GNA) as he made an unannounced visit to the Libyan capital.

The fledgling government is seeking to form a unity government in the war-torn country. The new prime minister, Fayez Seraj, and his deputies arrived to the Libyan capital by boat at the end of March, and are operating from a heavily-protected naval base in the city.

Minister for Foreign Affairs Charlie Flanagan, who attended Monday’s meeting, said he had discussed the upcoming UN summit on migration which is being co-facilitated by Ireland, with the UN High Commissioner for Refugees, Filippo Grandi.

Ireland has been chosen, along with Jordan, to facilitate the summit in September which is expected to be attended by almost 200 heads of state and government.

The recent EU-Turkey deal, which seeks to close off the main route for migrants entering the European Union through Greece, has sparked fears that migrants may now turn to the Libyan-Italy route to reach Europe.