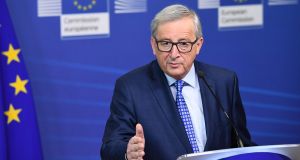 The EU has called on the civil authorities in Turkey to launch a transparent investigation into the referendum result granting Turkish president Recep Tayyip Erdogan sweeping new powers.

A spokesman for European Commission president Jean-Claude Juncker said claims from neutral observers of election irregularities had been “examined attentively” in Brussels.

“In view of the observers’ report, the close referendum result and the far-reaching implications of the constitutional amendments, we call on the Turkish authorities to consider the next steps very carefully and seek the broadest possible national consensus in the follow-up to the referendum,” the spokesman said. “We call on all actors to show restraint and on the authorities to launch transparent investigations into these alleged irregularities found by the observers.”

Significantly, the spokesman confirmed that neither Mr Juncker nor the president of the European Council, Donald Tusk, had spoken to Mr Erdogan since his victory.

In contrast, US president Donald Trump congratulated the Turkish president personally on the phone on Monday in a conversation in which they discussed recent developments in Syria and the US response to the chemical attack in Syria, and “agreed on the importance of holding Syrian president Bashar al-Assad accountable”.

‘Move closer to the EU’

Speaking at a press conference in Brussels, the commission’s spokesman added: “As far as the future is concerned, as President Juncker has said in the past, we encourage Turkey to move closer to the EU again and not to move even further and faster away from us.”

The referendum resulted in 51.4 per cent of Turkish voters casting their ballot in support of expanding the powers of the presidency, while the no vote had 48.6 per cent support.

A key point of contention rests on the election board’s late decision to count unstamped ballots, which would have been invalidated in past elections and which accounted for about 1.5 million votes. The yes campaign had taken a lead of 1.1 million votes by the end of the count. Observers from the Council of Europe and the Organisation for Security and Cooperation in Europe said the referendum campaign had been conducted on an “unlevel playing field”.

Turkish prime minister Binali Yildirim said on Tuesday that claims of irregularities in the referendum were a vain effort to cast doubt on the result, after the main opposition party vowed to apply for the vote to be annulled.

“The people’s will has been reflected at the ballot box, and the debate is over,” Mr Yildirim told his parliamentary group. “Everyone should respect the outcome, especially the main opposition.”

European leaders have been cautious in their response to the result, in part because of fears of endangering a migration deal with Turkey that has stemmed mass movements of people to the continent.

One trade-off for that deal with Turkey, in which it acts as a buffer, has been the promise of giving 75 million Turks the right to enter the EU’s Schengen area without a visa. In a further sign of nervousness about the referendum’s implications for the migration pact, the commission’s spokesman did not rule out visa-free travel coming to fruition for Turkey.

However, asked about Mr Erdogan’s suggestion in his victory speech that he could hold a referendum on reintroducing the death penalty, the commission spokesman described it as “the reddest of red lines” with regard to Turkey’s decade-long attempt to join the bloc.

Talks about accession to the EU began in 2005, but progress has been limited because of concerns over Turkey’s human rights record, among other factors. Mr Erdogan has suggested he will put the accession question to the people in a referendum.