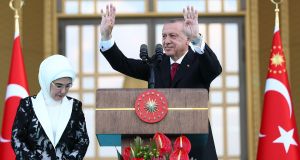 Turkish president Recep Tayyip Erdogan, next to his wife Emine Erdogan, at the presidential complex in Ankara on Monday as he was sworn in as head of state. Photograph: Kayhan Ozer/AFP/Getty Images

Recep Tayyip Erdogan has gained the power to appoint the governor of Turkey’s central bank and hundreds of other senior officials, unnerving markets as the country’s new executive presidency comes into force.

The Turkish leader issued his first set of presidential decrees just hours after being sworn into office, triggering the transition to a muscular system of governance that Mr Erdogan has sought for years. The new model, which was narrowly approved by a contentious referendum last year, has abolished the role of prime minister and given unprecedented powers to the president.

Turkish stocks and bonds tumbled as investors fretted about the new system and Mr Erdogan’s decision to appoint his son-in-law Berat Albayrak to head the newly formed treasury and finance ministry while sidelining Mehmet Simsek and Naci Agbal, two market-friendly figures who held senior posts in the previous government.

“The risk that Turkey could be heading for a full-scale currency crisis, after barely avoiding it only a few months ago when the lira was falling precipitously, has resurfaced,” said Piotr Matys, an emerging markets currency strategist at Rabobank.

“By giving Mr Albayrak such a prominent role at a crucial time for Turkey and ousting market-friendly Simsek and Agbal, President Erdogan has reignited market concerns that his administration may implement unorthodox policies, which include lowering inflation by cutting interest rates.”

Markets were also rattled by an emergency decree ahead of Mr Erdogan’s inauguration that removed a stipulation that the term of the central bank governor lasted five years. A new decree issued early on Tuesday under Mr Erdogan’s new powers reimposed a term limit of four years.

Among Mr Erdogan’s first appointments was a new head of the armed forces after his decision to select Hulusi Akar, a four-star general, to the position of defence minister. He will be succeeded in the role of chief of the defence staff by General Yasar Guler, who was formerly head of Turkish land forces. – Copyright The Financial Times Limited 2018