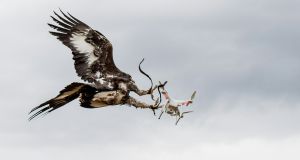 In a battle between ancient arts and modern technology, France’s army is teaching birds of prey to bring down remote-controlled drones when they enter no-go urban airspace.

Four golden eagles are getting military training for combat against battery-charged drones that just about anybody can buy in a local store and fly into security-sensitive zones such as presidential palaces - wittingly or not.

“These eagles can spot the drones several thousand metres away and neutralise them,” Jean-Christophe Zimmerman, a French air force general, told reporters.

The idea, he says, was inspired by Dutch police trials.

Advantage over gun use

The millennium-old art of falconry has an advantage over gun use, he said, in cases where large crowds are present, such as during annual street parades where thousands turn out to see fireworks shows or the country’s president on July 14th, a national holiday.

In theory, the birds can grab or at least halt a drone, many of which are now sold in toy shops or stores for enthusiasts of remote-control objects.

Militants might also, however, seek to employ them as a way to drop explosives from afar.

The eagles reduce the risk posed by use of firearms in crowded zones, Gen Zimmerman said.

To prepare them, the baby eagles were placed before birth on top of drones while still inside the eggshell and, after hatching, kept there during their early feeding period.

Use of drones over the Elysee presidential place in early 2015 and a sensitive military site in the western region of Brittany raised alarm bells last year, prompting adoption of legislation which restricts usage in urban areas and obliges users to notify their existence to authorities.

The GFK consumer-measurement institute says some 300,000 such drones were sold in France last year alone.