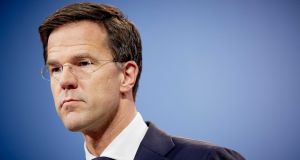 Dutch prime minister Mark Rutte: The “mini Schengen” plan of cutting back the borderless zone to just five countries – the Netherlands, Germany, Belgium, Luxemburg and Austria – was being discussed before the Paris attacks. Photograph: Martijn Beekman/EPA

It’s a sign of how fractious the European debate over the future of Schengen has become that the only coherent proposal this weekend is one from the Netherlands: that the borderless zone should be cut back radically from the current 26 countries to a new core of just five.

EU leaders meet on Sunday for a summit with Turkey to discuss the continuing influx of migrants from Iraq and Syria, with a tweet from European Council president Donald Tusk, suggesting a relatively innocuous agenda – “Re-energise our relations and stem migration flow”.

But whereas six months ago the refugee debate focused on how to prevent thousands of drownings in the Mediterranean, and how and where to relocate those who survive that appalling journey, the Paris attacks have – rightly or wrongly – recast that entire discussion as an existential security issue.

The issues of migrants and security sit uneasily together. To open Europe’s arms to all those in need means potentially opening our cities to attack. On the other hand, to end free movement is arguably to play into the hands of those who advocate a xenophobic new “Fortress Europe”.

And yet mounting domestic pressure from right-wing political parties – whether it’s the National Front in France, Ukip in the UK, or Geert Wilders’ Freedom Party in the Netherlands – is powerfully underlining that new security emphasis for many European leaders.

“I want it shut. I don’t care how this happens, whether it is through pressure from Europe or through other agreements, just as long as it happens.”

He reinforced his concerns by adding, “As we all know from the Roman empire, big empires go down if the borders are are not well protected.”

If there was a hint of frustration in Rutte’s tone, perhaps it echoed comments on Tuesday by French prime minister Manuel Valls who described the Paris killings as “a moment of truth” and said Europe should accept “no more refugees”.

The following day German chancellor Angela Merkel acknowledged there were now questions over whether Schengen could be maintained in the long term, while EU Commission president Jean-Claude Juncker warned that without Schengen’s open borders there could ultimately be no euro.

So, as Europe struggles to cope with the biggest migration crisis since the second World War and the common currency stands in jeopardy, perhaps it’s just as well the Dutch have a plan which, it’s worth noting, had been in the making well before the Paris attacks.

Dutch foreign minister Bert Koenders has confirmed that “transit camps” would be set up outside the borders of mini-Schengen where there would be stringent identity checks for migrants entering the new borderless zone.

The proposal has already been discussed extensively in the Netherlands and has the backing of Rutte’s Liberal Party. Its junior coalition partners, Labour, have said they will support the plan “only if European border policy continues to fail” – which must now be close to a given.

The Dutch plan has also been discussed at official level with the other four countries, including Germany, whose interior minister Thomas de Maiziere confirmed the talks but said Berlin still believed a better option was “that the Schengen area as a whole functions”.

The simple fact though is that Schengen no longer functions as it should. Only this week, Norway – which is not in the EU but is a member of Schengen – introduced border checks with neighbouring Sweden, which is expected to accept 350,000 new refugees by the end of next year.

Ironically, the greatest challenge facing the mini-Schengen proposal may turn out to be that it violates the guarantee of freedom to travel freely within the current 26 Schengen members.

Perhaps that is why the European Commission says it has so far received no formal proposals from the Dutch or any other potential mini-Schengen members.

However, if another leaders’ summit passes this weekend without action, that might quickly change.