Austerity and terrorism have made people in The Netherlands more conservative 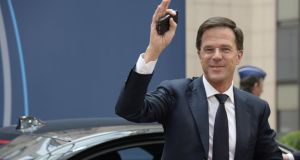 It’s indicative of what a hot topic immigration has become in the Netherlands that prime minister Mark Rutte’s Liberal Party has just produced a seven-page position paper suggesting it’s time for Europe to close its borders to refugees and asylum-seekers.

And if it seems counter-intuitive that the larger party in a Liberal-Labour coalition in arguably the most liberal country in Europe is suddenly advocating a new “Fortress Europe”, perhaps that’s indicative too of a new “Fortress Netherlands” mentality on the part of the Dutch.

In common with other European countries, seven years of austerity and a faltering euro have taken their toll on Dutch society. That, combined with the threat from returning jihadists, has swung public opinion here to the right – leaving Geert Wilders and his Freedom Party solidly atop the polls.

Even so, it’s a mixed bag of political concerns: dissatisfaction with the Brussels “monster”, hard economic times and concerns about radical Islam feeding into a phobia about “mass” immigration. This makes it difficult for centrist parties to gain traction and counter the populist trend.

That fragmentation was reflected in an Ipsos poll last week which showed – in a dramatic shift for the Dutch – that only one in five respondents believes the UN convention on refugees should continue to be honoured by allowing refugees to resettle in Europe.

Most interestingly in the light of the Liberals’ document on immigration, just 14 per cent of those questioned were in favour of closing Europe’s borders altogether and abandoning the UN convention – though that figure rose to 49 per cent among Freedom Party supporters.

As was its intention, the Ipsos poll raised some intriguing questions about the Liberals’ document, chief among them being: why?

Why adopt such an extreme position on such a populist issue when it’s inconceivable it could ever be carried through parliament? Why propose it as government policy when Labour has made clear it will never accept it? Why bother at all when it’s more hardline than most people are demanding?

The answer, says Liberal MP Malik Azmani who wrote the document, is that the figures show, quite objectively in his view, that immigration in to Europe is out of control, having increased last year by 191,000 to an annual total of 626,000.

That might seem an arguable point – except that the Dutch refugee agency, Vluchtelingenwerk, says that typically 97 per cent of refugees already stay in their own region, while only 3 per cent look further afield – mainly because the living conditions in refugee camps are so horrendous.

A good example is Syria, says agency director Dorine Manson, with the vast majority of those displaced by the fighting clustering in neighbouring Turkey, Lebanon, Jordan and Iraq, hoping one day to return.

“European countries agreed after the second World War that there must always be protection here for those who need it,” Manson said. “For that reason, it would be totally unacceptable for Europe, or for the Netherlands, to close its borders.”

Dispatched with such relative ease, the focus has now turned to the status of Azmani’s paper: was it ever intended as Liberal policy and should it perhaps have been more nuanced in distinguishing between immigrants, refugees, asylum seekers and economic migrants?

Or perhaps nuance was never the point. Perhaps it was a test to see whether there could be mileage for the Liberals in stealing some of Wilders’ populist clothes in the run-up to the next general election, which is maybe 18 months away.

That would be the most distasteful interpretation. Because if what will certainly be a fierce electoral battle between the Liberals and the Freedom Party is going to be reduced to who’s tougher on immigration, then the Netherlands itself will be the real loser.