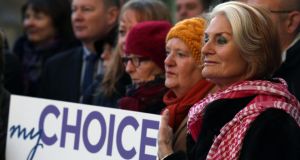 Campaigners supporting the Assisted Suicide Scotland Bill during a rally outside the Scottish Parliament in Edinburgh on February 17th. The Netherlands legalised assisted suicide in 2002 but the issue remains controversial there. Photograph: David Cheskin/PA Wire

The first time I came across physician-assisted suicide was when a Dutch couple to whom I’ve become close over the years told me they were going to visit an old friend in hospital because he had decided to end his life that Sunday afternoon and wanted them to be with him.

If that sounds an unusually matter-of-fact way to treat something as emotional and final as the death of a friend, well, the Dutch are matter-of-fact people. This Dutch couple, in their mid-70s with children and grandchildren, struggled to understand my polite surprise.

Their view was straightforward: their friend had a terminal illness, he was in pain, morphine was becoming less and less effective, the end was close – so he had decided, in consultation with his family and physicians, to take control of the few days that were left to him.

The Netherlands was the first country in the world to legalise euthanasia, and in my friends’ view, the legal safeguards surrounding the Termination of Life on Request and Assisted Suicide (Review Procedures) Act, 2002, were more than adequate to counterbalance any “slippery slope” argument.

There are six conditions: the patient’s suffering must be “unbearable” with no prospect of improvement; his or her request for euthanasia must be voluntary and persist over time; they must be fully aware of their medical condition and prognosis; all this must be confirmed by one other independent doctor; the death must be carried out in a medically appropriate fashion, with the doctor present; and most poignantly, the patient must be at least 12 years old.

While euthanasia is now a fact of life and death in the Netherlands, that’s not to suggest, however, that it’s uncontroversial, particularly since the number who have chosen it has doubled in the past decade – rising by 13 per cent to 4,188 in 2012, to 4,829 in 2013 and expected to top 6,000 last year.

Amongst its critics is Dr Peter Saunders of the Christian Medical Fellowship in the UK who claims those rising figures illustrate that euthanasia is impossible to regulate effectively. “Euthanasia in the Netherlands is way out of control,” he maintains.

A particularly controversial area, not surprisingly, is the question of how euthanasia deals with mental as against physical illness – a debate stoked by figures showing that 42 patients with “severe psychiatric problems” chose assisted suicide in 2013, compared with 14 in 2012 and 13 in 2011.

That’s an area that’s tackled in a new survey of 2,500 randomly selected Dutch doctors – GPs as well as specialists in the fields of elderly care, respiratory medicine, neurology, cardiology, internal medicine, and intensive care – for the Journal of Medical Ethics.

Of the 2,269 eligible respondents, 1,456 completed the survey, a response rate of 64 per cent. Of those, 77 per cent said they had been asked at least once for help to die – rising to 99 per cent among general practitioners.

Drilling down, the figures showed that 60 per cent of the doctors surveyed had actually helped someone to die, 28 per cent of them within the previous 12 months.

They also showed that attitudes to euthanasia varied according to the medical condition: for instance, 85 per cent said they would consider it for a patient with terminal cancer, while for “other physical diseases”, the figure was 82 per cent.

Twenty-seven percent said they would be prepared to help someone who was “tired of living” if they also had a “severe medical condition” – while only 18 per cent would do so where there were “no other medical grounds for suffering”.

As to patients with psychiatric conditions, 40 per cent of doctors said they would be willing to help someone with early stage dementia to die. However, fewer, 33 per cent, would consider it for someone with late stage dementia, even where there was an existing written directive.

Previous studies, says Dr Eva Bolt of the EMGO Institute for Health and Care Research in Amsterdam, have asked physicians if they agreed or disagreed with the actions of hypothetical colleagues, while this one asked directly: what would you do?

“I hope this helps the dialogue between patients and physicians – and shows this is not something doctors take lightly,” she says.