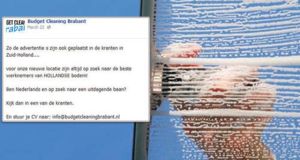 
In a row eerily redolent of apartheid in South Africa or the “colour bar” in the United States, a Dutch cleaning company has caused a storm of controversy by declaring it has a whites-only staff recruitment policy – and works only for white customers.

Wesley de Laat, owner of Budget Cleaning Brabant, laid his requirements on the line when he advertised for Dutch-born white-only gardeners on Facebook and in the regional press, maintaining in answer to angry criticism that “white workers are better than non-white workers”.

“I don’t discriminate,” he insisted. “I just don’t invite them for interview. Poles, Moroccans, any non-whites, are not going to be hired to work for this company. Achmed and Ali are probably very good people, but I don’t want them working for me.”

Mr De Laat’s comments come at the end of a week in which the Dutch Human Rights Council reported what it described as “explosive growth” in complaints of discrimination during 2013 – up 75 per cent on 2012 to 2,481 cases.

Co-incidentally, the council said more than half the complaints were work-related. “Exclusion takes place at entry level to the labour market. Companies are refusing to accept people on work experience, for example, because of their skin colour or because they wear headscarves.”

Anti-Moroccan
Right-wing political leader, Geert Wilders – whose anti-immigrant Freedom Party has been consistently topping the polls in the Netherlands in advance of the European elections – was excoriated in the media recently for leading anti-Moroccan chants at a post-election rally.

However, there is no indication that Mr de Laat is politically motivated. He says he has identified a growing market demand for white-only workers – and he plans to provide them.

“Other companies are hypocrites. They tell non-white candidates they don’t fit within ‘the company profile’. At least I tell them straight up. People of colour need not apply – even if they have Dutch passports.”

He even went this far: “ Al zou koningen Maxima soliciteren, ze kom er niet in ” – “Even if Queen Maxima herself applied, she would not get in.” The queen is Argentinian by birth.

1 Coronavirus: Surge in cases still expected to hit hospitals in coming days and weeks
2 ‘Everyone still thinks it’s a joke’ - parents of toddler with coronavirus speak out
3 Coronavirus: Trump’s tone changes as US faces brutal loss of life
4 Coronavirus: Should everybody be wearing masks to combat Covid-19?
5 Coronavirus: Westmeath has highest rate of Covid-19 outside of Dublin
Real news has value SUBSCRIBE